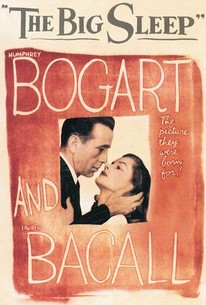 The definitive Humphrey Bogart/Lauren Bacall vehicle, The Big Sleep casts Bogart as Raymond Chandler's cynical private eye Philip Marlowe. Summoned to the home of the fabulously wealthy General Sternwood (Charles Waldron), Marlowe is hired to deal with a blackmailer shaking down the General's sensuous, thumb-sucking daughter Carmen (Martha Vickers). This earns Marlowe the displeasure of Carmen's sloe-eyed, seemingly straight-laced older sister Vivian (Bacall), who is fiercely protective of her somewhat addled sibling. As he pursues the case at hand, Marlowe gets mixed up in the murder of Arthur Geiger (Theodore von Eltz), a dealer in pornography. He also runs afoul of gambling-house proprietor Eddie Mars (John Ridgely), who seems to have some sort of hold over the enigmatic Vivian. Any further attempts to outline the plot would be futile: the storyline becomes so complicated and convoluted that even screenwriters William Faulkner, Leigh Brackett, and Jules Furthmann were forced to consult Raymond Chandler for advice (he was as confused by the plot as the screenwriters). When originally prepared for release in 1945, The Big Sleep featured a long exposition scene featuring police detective Bernie Ohls (Regis Toomey) explaining the more obscure plot details. This expository scene was ultimately sacrificed, along with several others, in favor of building up Bacall's part; for instance, a climactic sequence was reshot to emphasize sexual electricity between Bogart and Bacall, obliging Warners to replace a supporting player who'd gone on to another project. The end result was one of the most famously baffling film noirs but also one of the most successful in sheer star power. ~ Hal Erickson, Rovi

Dorothy Malone
as Girl in Bookshop

News & Interviews for The Big Sleep

On DVD This Week: Spotlight, Fargo, The Good Dinosaur, and More
Frank Miller and Clive Owen to Do Some Old-School Film Noir
User Tomato Awards: "The Departed" Is Your Favorite of 2006

View All The Big Sleep News

Critic Reviews for The Big Sleep

It is a fast-moving drama, knee-deep in corpses, as tough as they come. It is rather'difficult to keep track of who is murdering whom and why, but there is not time to worry about such details with so many bullets flying around.

The Big Sleep is the best scripted, best directed, best acted, and least comprehensible film noir ever made.

The plot is a bundle of confusions, but who cares? Few films have made cigarettes seem so glamorous. Or had such seductive repartee.

The Big Sleep is as fresh and perverse as ever, and remains one of Hollywood's most entrancingly strange bedtime stories.

The Big Sleep is wakeful fare for folks who don't care what is going on, or why, so long as the talk is hard and the action harder.

The Big Sleep, though, is witty and sinister, and in an odd way is a realistic portrayal of big-city life with Arabian Nights overtones.

Just when a few solutions are offered up, further conundrums arise, as if fate dictates that Marlowe can never really be finished with a case.

For all the untidiness of its plot, The Big Sleep is, however, an enjoyable melodrama, exciting most of the time and comic when it chooses to be.

There has probably never been so much plot in a film -- but it doesn't seem to matter. It, all looks very exciting, and if you follow half of it you'll get through.

It is brilliantly directed and photographed. It moves with breathless speed. The acting is admirable. The dialogue (Raymond Chandler and William Faulkner are among those credited) is of an unusually high level of humour and crispness.

...seriously, does anyone care how the chauffeur died?

To watch The Big Sleep is to witness a distinctly American film genre at the heights of its power, nonsensical plot notwithstanding.

Audience Reviews for The Big Sleep

If one enjoys a detective outing that makes sense, where all the dots connect, then one need search elsewhere, making sense is not the purpose here. But if moody atmospherics and crack dialogue is your thing then settle in for one primo experience

A smart detective story full of the most exquisite dialogue and with an extremely complex plot that prompts us to try to connect the pieces of the intricate puzzle in our heads, even if it actually does not answer all of the questions (the death of a certain character is left unsolved).

it's supposed to be a classic, and, while I did enjoy this film noir caper, I must say...it's pretty overrated. Based on a novel by Raymond Chandler, this is about cynical private investigator Philip Marlowe and his involvement in a blackmail case that turns murderous. The film is noted for being really complex and confusing, and that's one of my main issues with it. I'm not a stupid person, but if the three screenwriters who adapted this had to contact Chandler and ask him to tell them what was going on, and even he didn't really know (or so he said), then you've got some problems here. I've watched, and enjoyed, some very complex and convoluted films before, but here it just didn't stick. I think maybe too it has something to do with how hyped this film was. Yeah, it's a strong mystery, and sure, maybe I did enjoy the fact that it's really more about the procedural aspects of a criminal investigation than the results, but even then it feels unsatisfying. Maybe that has to do with my other major complaint, which is censorship. I know that you can still have a great work of art without having to details all the graphic aspects, but when the more sordid stuff is integral to the film, then maybe yeah, they need to be shown. Obviously that wasn't gonna happen in the 40s, but maybe they could have tried to really be groundbreaking, even if it meant courting more controversy than they would have wanted to deal with. Look at stuff like A Clockwork Orange as a prime example. Sorry for ranting, I just couldn't help it. Anyways, yeah, this is a fun, though challenging mystery thriller. I think what makes it work in the end are the performances, and the chemistry the cast have with one another, especially where Bogart and Bacall are concerned. Those tow are terrific, and its said that Bogart's turn are Marlowe is the definitive one. Works for me. Martha Vickers is also really good, and, even though she makes just a brief appearance, I loved Dorothy Malone as the book seller that Marlowe has a moment with while hiding out in her shop. It's a great scene (and one where I'm okay with the subtlety). Despite how much of a complicated mess this is, the film does have some great lines, and a dry and sardonic sense of humor. It's really stylish, and from a formal perspective, is very impressive. The look is great, it's well shot, and the score by Max Steiner is a real treat. It has its flaws, and I'm prepared to have my cinema buff card revoked for saying anything bad about this film, but I stand by my judgment. I did like it, and do recommend it, but think that it's not as grand as I was lead to believe.

Phillip Marlowe gets embroiled in a family's drama, which quickly turns murderous. Everything about this film is perfect. The mystery is compelling and engaging because the characters are always ahead of the audience, which is refreshing in this age when everything but flashing arrows tell modern audiences when the detective encounters a clue. The writing is sharp and funny with lines so good and so right for Bogie that it's impossible to imagine anyone else saying them. For example: Eddie Mars: Is that any of your business? Philip Marlowe: I could make it my business. Eddie Mars: I could make your business mine. Philip Marlowe: Oh, you wouldn't like it. The pay's too small. And there's Bogie and Bacall -- film legends with legendary chemistry -- who sizzle the screen. It's only their talent that makes a rather tepid love story work. I don't see anything profound or socially necessary about The Big Sleep, but films like this can be intellectually engaging and fun. Overall, The Big Sleep is a foundational film and a great time at the movies.