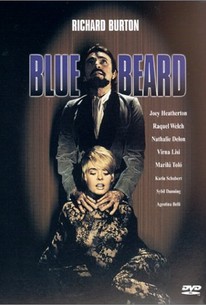 Bluebeard is the retelling of the now familiar story of a wealthy aristocrat who marries and murders and marries again. Baron Von Sepper (Richard Burton), the BlueBeard of the story, meets and marries Anne (Joey Heatherton) who becomes suspicious of Von Sepper when she finds evidence of his murders shortly after their wedding. Van Sepper then, in graphic detail, tells Anne the stories of his former wives' lives and deaths. The movie, directed with ham-handed archness by Edward Dmytryk, attempts to tell the story as a black comedy. Despite an array of beautiful women, including (Virna Lisi), (Nathalie Delon) and (Raquel Welch), nothing can distract from the abysmal performances of Burton and Heatherton. The film has some nice costumes and is beautifully photographed by cinematographer Gabor Pogany, but all the humor is unintentional and the actors, particularly Richard Burton all seem to wish they were elsewhere. ~ Linda Rasmussen, Rovi

Sybil Danning
as The Prostitute

Mathieu Carriere
as The Violinist

Marilu Tolo
as Brigitte
View All

There is no longer any novelty in watching the sad disintegration of Richard Burton's acting career.

The film's gratuitous exploration of female flesh is only exceeded by the way Dmytryk manages to sexualize a nun who becomes Bluebeard's future wife.

Despite the lineup of flesh and international sex symbols, the process proves overlong and borderline boring, unable to muster suspense to supplement the eye candy.

Call it refreshing without filling, bubblegum for the mind, with a little horror, nudity, and Burton theatrics thrown in for fun.

As the latest chapter in the Decline and Fall of Richard Burton's career, Bluebeard may be considered the rock-bottom of a long and agonizing slide.

It's a compromised film that tends to offend everyone but the Nazis.

Dmytryk was a cranky professor, but one fine director.

There are no featured reviews for Bluebeard at this time.