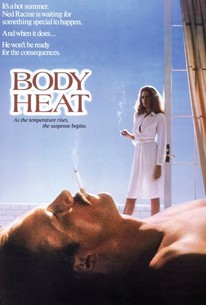 Critics Consensus: Made from classic noir ingredients and flavored with a heaping helping of steamy modern spice, Body Heat more than lives up to its evocative title.

Critics Consensus: Made from classic noir ingredients and flavored with a heaping helping of steamy modern spice, Body Heat more than lives up to its evocative title.

Critic Consensus: Made from classic noir ingredients and flavored with a heaping helping of steamy modern spice, Body Heat more than lives up to its evocative title.

Lawrence Kasdan's first directorial effort is a throwback to the early days of film noir. The scene is a beastly hot Florida coastal town, where naive attorney Ned (William Hurt) is entranced by the alluring Matty (Kathleen Turner in her film debut). Ned is manipulated into killing Matty's much older husband (Richard Crenna), the plan being that Ned's knowledge of legal matters will enable both conspirators to escape scott-free. This might have been the case, had not Matty been infinitely craftier than the cloddish Ned. Just when it seems as though the film has run out of plot twists, we're handed yet another surprise.

Filomena Triscari
as Hostess at Tulios

Bruce A. Lee
as Man on the Beach
View All

There's no mistaking the fact that Kasdan loves the tawdry genre he's working in.

Still regarded as one of the steamiest movie's of all time, Body Heat is a fantastic exponenet of how noir has developed.

Lawrence Kasdan's 1981 noir fable is highly derivative in its overall conception, but it finds some freshness in its details.

Though Lawrence Kasdan's film is set in today's South Florida, its characters move through an atmosphere that suggests the confluences of decor and demeanor in a 1940s film noir.

There's no denying the narrative confidence that brings the film to its unfashionably certain double-whammy conclusion.

While Body Heat involves murder, fraud, a weak hero led astray and a seductive, double-dealing broad, it also incorporates something new: a sexual explicitness that the old films could only hint at.

...an atmospheric drama that benefits substantially from its moody, steamy ambiance and proliferation of top-notch performances...

John Barry's noirish lounge music creeps into every other scene, cigarette smoke wafts through every room, and shadows tend to fall across everything.

Pure noir, which may force too much the final thought of Hurt's character - he's dumb, but he's still a lawyer - but that dazzles, never better, in each of its frames. [Full Review in Spanish]

Body Heat won't disappoint those who follow it with innocence. It's a movie made with a certain exuberance. [Full Review in Spanish]

Finally got round to watching this as heard it was a great thriller and Kathleen Turner's first film role. It looks very old and dated more like an early 70's film. It starts far too slow for me with not much happening for the first half of a long run time. Once the pace picked up towards the end and plot unraveled I did like it a lot more. It has some neat twists in it and I can see how this influenced the likes of the Wild Things thrillers just for one example. If you like thrillers it's worth sticking with for the 2nd half of the film.

Oh my goodness it is so Dramatic wit a capital D, but in a good, film noirish, sweat-dripping-off-the-body kind of way.

Ned: You better take me up on this quick. In about 45 minutes, I'm going to give up and go away.  I'd been told Body Heat was a fantastic movie, but before watching it for myself I had my doubts. First, I was never a big Kathleen Turner fan. Also, it just didn't look like a movie that could entertain me for two hours. I'm glad to say I was wrong. Kathleen Turner turned in an amazing performance as Matty Walker and the movie was not lacking in entertainment and suspense. It had it all. It was an erotic, suspenseful crime-thriller. Watching Turner and Hurt on the screen together was real joy. This was Turner's first role and Hurt's second, but they looked like veterans on the screen. Their chemistry was spot on perfect and left you satisfied with their relationship. Ted Danson turned in a nice little supporting role as Ned's(Willaim Hurt) best friend. Although he wasn't on screen all that much, when he was, he played his role really well. The story seems pretty straight forward and I thought the movie was going to go the length without a twist. I thought it was going to be a what you see is what you get movie. That however isn't the case in the end. The film didn't cheat with it's twist though. It makes sense and if you think back, you can see how this could have happened. It's a real testament to both the filmmaker and to both Hurt and Turner.  Lawrence Kasden, in his film debut also, weaves a very compelling and believable noir. Hurt and Turner look so authentic together that you think their relationship is real. The way they look at each other. The way they talk to each other. The way they touch each other. It all looks so genuine and realistic, that I almost forgot I was watching a movie altogether.  Body Heat is a masterpiece in every single conceivable way.  It is influenced by the film noir's of the 40's and 50's and that influence is easily seen. Even in a 1980's setting the 40 and 50's influences don't seem out of place. Everything works so well together. The dialogue, settings, music, performances, and even the way the smoldering heat of Florida is used. It all fits together in the most perfect way to make an amazing film experience.