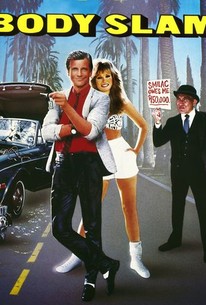 Harry Similac (Dirk Benedict) is a music promoter who must scramble to stay out of debt in this slapstick comedy. He hits upon the idea of becoming a wrestling promoter and steals Rick Roberts (Roddy Piper) from his former manager Captain Lou Milano (Lou Albano). He books his rock band Kick at the match and creates a new phenomena that combines wrestling with rock n' roll. Charles Nelson Reilly, Billy Barty, and John Astin provide memorable comedy relief. Cameo appearances by wrestlers Ric Flair, Afa & Sika, Sheik Adnan Al Kaissy, Freddie Blassie, and Bruno Sammartino add further realism to this feature that recalls the rock-and-wrestling spectaculars of the early 1980s.

A mediocre comedy that will appeal to wrestling fans far more than anyone else.

There are no featured audience reviews yet. Click the link below to see what others say about Body Slam!