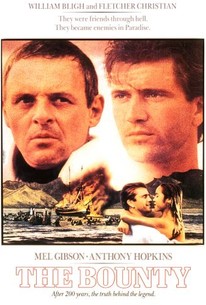 Critics Consensus: Thanks in large part to its cast, and Anthony Hopkins in particular, The Bounty's retelling of the mutiny on the HMS Bounty is an intelligent, engaging adventure saga.

Critic Consensus: Thanks in large part to its cast, and Anthony Hopkins in particular, The Bounty's retelling of the mutiny on the HMS Bounty is an intelligent, engaging adventure saga.

This fourth film dramatization of the 1789 mutiny aboard the H.M.S. Bounty is based not on the familiar Nordhoff and Hall book, but on Richard Hough's novel Captain Bligh and Mr. Christian. This time, the infamous Captain Bligh (Anthony Hopkins) is as strict a disciplinarian as ever. He is, however, no monster; faced with his crew's increasing laxity after an idyllic visit to Tahiti (the search for breadfruit takes second place to limitless sex with the island girls), Bligh is forced to resort to flogging and other such means to keep his men in line. Mr. Christian (Mel Gibson), formerly Bligh's friend, is of little use to the captain, having fallen in love with a native girl himself. Christian becomes the leader of the mutiny virtually in spite of himself; and when the mutineers try to seek refuge on Tahiti, they find that the local chief wants no part of them, which is why they settle for the nearly uninhabitable Pitcairn.

Jack May
as Prosecuting Captain

News & Interviews for The Bounty

View All The Bounty News

Critic Reviews for The Bounty

An intelligent, firstrate, revisionist telling of the famous tale of Fletcher Christian's mutiny against Captain Bligh.

It's all a brave try, though Gibson is perhaps not up to the demands of a Christian's progress from naive rating to self-loathing exile, and Donaldson's direction often verges on the stolid.

A great adventure, a lush romance, and a good movie.

On the basis of three films, it is now possible to say that the Pacific Ocean is not Dino De Laurentiis's cup of tea.

For a film that tries so hard to follow a 'mass appeal' format, The Bounty fails to consolidate properly each of the formula's ingredients to offer anything special or memorable to the audience it is so eager to capture.

The Bounty ultimately tries to do too much ... it's a missed opportunity that needs trimming in some areas and extra time in others.

Jason Wilson
Under the Radar

While no match for the revered classic that earned the Best Picture Academy Award for 1935 (Mutiny on the Bounty, starring Clark Gable and Charles Laughton), this is an intelligent retelling that relates the historic mutiny through an altered prism.

Hopkins brilliant perfomance adds complexity to Captain Bligh, and this intense and intelligent historical adventure is the third and best film version of the famous mutiny.

Solid remake of the classic tale.

Despite its flaws, this is a film that looks great, includes a memorable Hopkins performance, and is well enough written to keep us thinking rather than latching onto stereotypes.

Audience Reviews for The Bounty

One of my fav adventure stories grandly told and with a grand cast. What adventure? Why nothing less than escape from the strictures of civilisation (seduced by what-is-still-the-dream: young, topless, and willing lasses in grass skirts, an adolescent fantasy for the ages, when wasn't this a fantasy?), back when there still was someplace to go to escape. Gibson, Olivier, Day-Lewis (nearly steals the film), and Neeson are all very good, but the film belongs to Hopkins as good ol' Cap'n Bligh, three cheers, men, hip, hip, hooray!

This movie is really good,i thoroughly enjoyed it. Its interesting and i must say antony hopkins is on top form with brilliant acting from him and the entire cast. Its a beautifully depicted and well wriitten movie thats worth the watch.

Could have done with less nudity but a good story and its amazing how he survived on that boat with nothing to eat or drink! Doesn't look like Mel Gibson but he was hot so oh well lol!