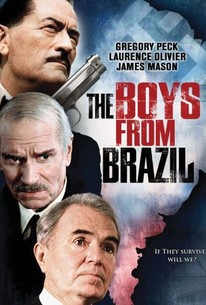 Critics Consensus: Its story takes some dubious turns, but a high-caliber cast and a gripping pace fashion The Boys from Brazil into an effective thriller.

Critics Consensus: Its story takes some dubious turns, but a high-caliber cast and a gripping pace fashion The Boys from Brazil into an effective thriller.

Critic Consensus: Its story takes some dubious turns, but a high-caliber cast and a gripping pace fashion The Boys from Brazil into an effective thriller.

The Boys from Brazil Photos

This film of Ira Levin's novel The Boys from Brazil wastes no time in establishing the fact that several seemingly unrelated men have been mysteriously murdered. Elderly Jewish Nazi hunter Ezra Lieberman (Laurence Olivier), brought into the case when the clues seem to point to a neo-fascist plot, traces the trail of evidence to Paraguay. Here he finds an unregenerate Auschwitz doctor, patterned on Joseph Mengele and played by -- of all people -- Gregory Peck. Lieberman discovers that the murdered men had all fathered sons who were identical -- the results of a cloning experiment, designed to create a race of incipient Hitlers.

Monica Gearson
as Gertrud
View All

Critic Reviews for The Boys from Brazil

This picture is another of [producer] Lew Grade's international blockbuster packages; the deals are worked out in terms of story elements that will sell and of performers with followings in as many markets as possible.

An impressive feat of carefully designed and modulated academic filmmaking, a class job in the tradition of Hitchcock or Wyler at their most polished.

Dark thriller that does its best but ultimately doesn't completely convince.

The plot is less suspenseful than the overacting contest between the two leads, Laurence Olivier and Gregory Peck, who spend most of their screen time one-upping each other in affectations.

With two excellent antagonists in Gregory Peck and Laurence Olivier, The Boys from Brazil presents a gripping, suspenseful drama for nearly all of its two hours -- then lets go at the end and falls into a heap.

The answer should have made a great thriller, but the film is sunk by a series of preposterous performances.

In an excess of ambition, this imaginative story tries to address too many things at once.

Olivier is staggeringly good -- does he know how to be bad? -- and all of the... stars who support him contribute gleaming performances.

A film too dopey and campy to be taken seriously, too mordant and sober to be much fun, and too ludicrous and melodramatic to be at all defensible as a social commentary.

This is a terrifically chilling entertainment, one that deserves a spot alongside the best paranoid thrillers of the 1970s.

It's more a silly and unbelievable pic than a bad one, but very watchable.

Audience Reviews for The Boys from Brazil

It benefits from an intriguing mystery (though more ludicrous than disturbing), while Olivier and Peck have both their moments of excellence in a compelling thriller where they mostly seem to be in a hilarious dispute to see who overacts more and devours the whole scenery.

Exciting mystery and action. Olivier was a bit over-the-top and played up stereotypes to the hilt as an aging Nazi hunter.

A criative and intriguing story. This Ira Levin's The Boys From Brazil chilling adaptation have a good screenplay and acting from Peck and Oliver. Fresh.

The Boys from Brazil Quotes