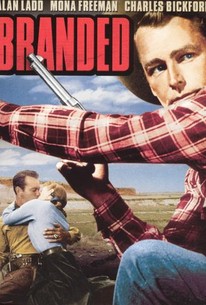 Rancher Charles Bickford comes to believe that drifter Alan Ladd is his long-lost son. In truth, Ladd is a crook, in league with Brian Keith to con Bickford out of his fortune. Intending to go through with the scheme, Ladd has second thoughts when Bickford and his "mother" Selena Royle shower him with the familial affection that he has lacked all his life. Making Ladd even more uncomfortable is the presence of his "sister" Mona Freeman, whom he has grown to love in a manner that might be misconstrued were he really related to her. Fed up with his masquerade, Ladd confesses the hoax and sets about to find Bickford's real son-who turns out to be the foster son of bandit Keith! This psychological western plays much better than it reads. For reasons unknown, a clip of Branded showed up in the 1977 Burt Reynolds vehicle Hustle.

Branded is a pleasing western that has a bit more plot and appeal than the average.

There is something about the silken smoothness with which Mr. Ladd plays a poke that is vaguely and idly amusing.

Ladd, seldom forfeiting a character for comic showboating and fancy style, is sold out by direction (Mate) that... loses his impenetrable face in the shade of ten-gallon hats, and takes little advantage of his quick, efficient movements.

Alan Ladd's convincing steel-cold performance as a no-gooder who it turns out has a heart, makes this film crackle and pop.

There are no featured audience reviews yet. Click the link below to see what others say about Branded!