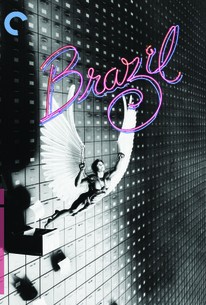 Terry Gilliam's 1985 film is a surrealist nightmare of a low-level bureaucrat in a dismal world of the near future.

It's like a stoned, slapstick 1984: a nightmare comedy in which the comedy is just an aspect of the nightmarishness.

Brazil is a stinging, Strangelovian satire of the power of the bureaucracy in an Orwellian landscape.

Brazil offers a chillingly hilarious vision of the near-future.

Fortunately the story of an alternative future is realised with such visual imagination and sparky humour that it's only half way through that the plot's weaknesses become apparent.

The world building in the film is another of its strongest points. The visual details throughout add so much to the story without ever being too distracting...

An uproarious satire of bureaucracy, technology, society, and humanity that proves to be one of the greatest movies of all time, sci-fi or otherwise.

An energetically quirky social metaphor, political commentary and action/sci-fi farce all balled up into one outrageously enjoyable experience, provided you like the work of Terry Gilliam.

Gilliam crams the screen with such a proliferation of bizarre and comic details that you'll want to revisit this particular nightmare again and again.

Influenced by Kafka, Orwell, and Kubrick, Gilliam's darkly humorous futuristic satire is narratively flawed and excessive in many ways, but it displays its creator's wildly vivid imagination and is intermittently witty.

Gilliam's funny and disturbing commentary on a modern society (only half pretending to be about some imaginary "other place" yet spot on accurate about our own after 30 years!) that sort of protects us all while sort of feeding on us is beyond price. Jonathon Pryce is spot on as a Stan Laurel everyman haplessly trying to right an impossibly wrong world. And the title? Its a dream destination that no one ever gets to.

A tour-de-force of dark comedy, terror, whimsy, and insufferable bureaucracy.

Terry Gilliam's Brazil is a highly engaging black comedy that uses a dystopian society as its backdrop, and puts a unique twist on the genre, and through Gilliam's camera lens, it's a truly bizarre and memorable vision. The dystopian genre is very interesting, and it's one that is always exciting to see what they'll come up with it. With Brazil you have something totally different, you have hints of humor thrown into the film's storyline, and it adds something to the enjoyment of the film. Dystopian society films are often dark, nightmarish portraits of a society, but with this film we get something very different. The formula here has been reworked to give the storyline a bit more range than your standard dystopian film, and in turn it makes for a truly engaging experience. In the hands of Terry Gilliam, you have a well crafted picture with some truly stellar performances from its cast, especially from lead actor Jonathan Pryce who lights up every scene that he's in. Brazil is a great film, one that succeeds at delivering a different take on your standard dystopian society film, and in the hands of Terry Gilliam, he crafts a standout picture that is sure to please genre fans looking for something a bit different. Brazil is eccentric in the way that it's told, and it makes for a truly entertaining two and a half hours. If you enjoy Gilliam's work, you're sure to enjoy this. What makes Brazil great is the fact that it has your standard dark, atmospheric elements than are synonymous with the genre, but there are also lighter touches comic relief to really make it stand out among other films. Brazil is great filmmaking and one of the finest dystopian society films I've seen. With a great mix of comedy and serious content, Brazil is a standout genre film that elevates the bar and makes for a truly worthwhile viewing experience.

A brilliant mad mess of a movie concerning a simple, mousy man (Jonathan Pryce), who is stuck to a boring, dead-end job in an Orwellian future, but still has big dreams of what he wants to become. The humor is pitch-black, the acting is precisely over the top, and the story is jammed packed with sublime jabs at society's clinging to clutter that is not making us better in the long run. The film's delightfully silly take on bureaucracy is a huge driving point to its success, where Gilliam continually finds ways to spice up his story while never missing a chance to take a swipe at something he hates. Not everyone's cup of tea to be sure, but besides "Monty Python and the Holy Grail", this is Gilliam's masterstroke. Although the relationship between Pryce and dream-girl Kim Greist could have used more work, with Greist's performance failing to leave a lasting impression, the story still succeeds on virtually every front. Not a perfect film, but very close to one.