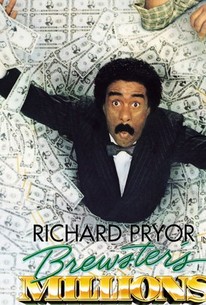 This 1985 take on the oft-remade comedy focuses on a baseball player who unexpectedly falls into 300 million dollars inheritance -- but to get it, he must spend 30 million dollars in 30 days. The player immediately embarks on a wild spending spree, and predictable silliness results.

Conrad Janis
as Businessman in Car

Malachy McCourt
as George, the Doorman

Roger Til
as Maitre D'

Lin Shaye
as Journalists at Rally

Wesley Thompson
as Journalists at Rally

Strawn Bovee
as Journalists at Rally

Matt Landers
as Journalists at Rally

Kip Waldo
as Hecklers at Rally

Shaka Cumbuka
as Hecklers at Rally

After a million brewskies, Brewster's Millions is passable fare as a late-night viewing option, but those seeking genuine laughs would do well to look elsewhere.

Tamed Pryor in '80s comedy with some salty language.

Lame recycled flick that wants to be "Arthur" and "Trading Places" but isn't.

One version too many of the classic comedy.

Hardly the finest version of this old yarn

A film of unrealized potential.

This was one of those early movies that kinda popped outta nowhere (for me). I think the earliest Pryor movies I remember seeing were double acts with Gene Wilder such as 'Stir Crazy'. As for Candy I believe I first saw him in 'National Lampoon's Vacation'. I remember this being a regular flick on TV back in the day, always on in the afternoon or early evening, easy going, fun for all but also very easily lost under the radar. Believe it or not but this story is actually based on a novel from 1902 and there have been many film adaptations (as well as theatre productions). The funny thing is these older films don't have quite the same impact, for example...the 1945 version sees Brewster having to spend a mere 1 million Dollars in 60 days or less to inherit 7 million (slight alteration from the original novel which has a full year to spend the 1 million). Now that feat would probably be relatively doable these days. The plot has always been one of much debate though it must be said. A rich old relation leaves Monty Brewster (Pryor) a tough decision in his will, he can either take 1 million Dollars no questions asked right away or he can take the challenge. The challenge being he has 30 days to spend 30 million Dollars and not have any assets (that he doesn't already own) at the end of it. Further to that he must receive value for services of anyone he hires, he cannot buy something expensive and just destroy it and he can't just give stuff away as gifts. He can only donate 5% to charity and gamble 5% away, plus he cannot tell anyone of the challenge. If he manages to do this by the 30 day limit he will inherit 300 million Dollars, if he fails he gets nothing, not even the 1 million. Now this has to be a real nail biter of a decision and one that is sure to draw discussion after you've seen it. Its like that age old question...what would you do if you won a vast amount on the lottery? Personally I'd be more inclined to take the 1 million and run because surely in this day and age (or even back then) it would be impossible to spend 1 million per day for 30 days. The fact you cannot own anything by the deadline is not only painful but just impractical. The main reason being if you had that kind of money the first things most folk would buy would probably be property, cars and gifts...all of which you can't do with this challenge. If you really really think about it, it would be incredibly hard to do. But of course the lure is the 300 million, money to literately burn, but failure results in zilch. A great concept for sure with added imagination and teamed up with some stellar 80's casting. This movie really can't go wrong, what better way to produce good comedic scenarios than having an everyday bum needing to spend spend spend on whatever he likes. The film practically writes itself, you know what to expect when you read about it and having the crazy unpredictable force of Richard Pryor in the lead is a surefire winner. Sure enough its enormous fun watching Pryor go from zero to hero with his fortune. He walks around New York like he owns the city, he's hiring people left and right on exorbitant salaries for menial tasks, he's allowing people to pitch wacky preposterous inventions and ideas to him for funding, making bad bets, throwing big bashes, running a protest campaign in the local elections for Mayor which would cost tonnes of money etc... The sequence where he buys a rare stamp (the Inverted Jenny) and then posts it is actually very clever indeed, I would have never thought to do that. Although I'm not sure if a stamp that's just over 70 years of age (in 1985) would be usable for actual postage, I could be wrong. Another clever idea (although part of the plot) was hosting an exhibition game between the local baseball team Brewster plays for and the Yankees, again I wouldn't of thought of that. Whilst watching questions do pop up in my little brain though. Even if he didn't manage to complete the challenge wouldn't he be able to stash amounts he earned through whatever venture in a bank account somewhere for later. If its not part of the 30 million I'm sure you could hide earnings, especially bet winnings or stocks and shares earnings. The other thing that hit me was his electoral campaign for Mayor which he was winning hands down, if he lost the challenge he could easily of kept that job. I don't think the company that was in charge of the challenge could take that away from him. Really I'm sure there could be ways of staying rich even if you did lose the challenge. I wouldn't really say I'm nitpicking but simply putting more thought into what I would have done if it was me, just like the lottery question. This is just one of those happy-go-lucky 80's productions that was extremely light-hearted and warm. As I said anyone can enjoy this with the ever dependable Candy in full flow with his funny fat faced expressions and mannerisms. Pryor shows he could do lovable easy comedy roles just as well as more edgy adult orientated ones and of course look out for an early Rick Moranis role. Not forgetting the great range of character actors and familiar faces supporting the main leads. A near perfect old classic underrated comedy with a fun story, fun performances and a happy ending.

Brewster's Millions, present a intelligent plot, that could have a better screenplay, and a comic cast with Richard Pryor, John Candy, Hume Cronyn, Archie Hahn and Rick Moranis. But the film become desappointing, showing a not so exciting script and a weak direction by Hill. However, it's a interesting movie. Probably, the anothers films, based on the homonym novel Brewster's Millions are better that is 1985 picture. Rotten.

This is actually a remake of an older movie, but Pryor is such a great comedy actor, it's really his movie, and it's very entertaining.

A great concept for a Comedy and an enjoyable rewatch of the 80?s classic. Thought provokingly comical.