The Bridge at Remagen1969 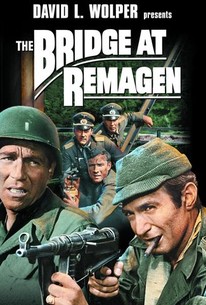 The Bridge at Remagen Photos

With American Army troops only a day away from the Germans, a Nazi general orders a bridge over the Rhine River be destroyed. Major Kreuger (Robert Vaughn) is the Nazi officer who realizes that if the Americans arrive on time, 50,000 German soldiers will have no escape route. The Allied commander orders Lieutenant Hartman (George Segal) to secure the bridge. With the help of Sergeant Angelo (Ben Gazzara), the Americans go deep into enemy territory to secure the strategically located crossing. Kreuger does his best to delay the destruction ordered by General Shinner (E.G. Marshall). As the American Army troop approaches, Kreuger is torn between following orders and saving the only means of escape from being dynamited in this action-packed war drama. Filming in Czechoslovakia was halted by the 1968 Russian invasion of the country. The production was finished in Italy.

Anna Gael
as The Girl
View All

Critic Reviews for The Bridge at Remagen

The war-is-hell theme is handled clumsily.

...those still living WWII in their heads will find much to enjoy; with Segal, Gazzara and other in lockstep with the tough-guy, 'war makes a man of you' theme, this is one for aging boys to savour

This film is similar to most NBA games, you could have watched only the last ten minutes and not missed a thing.

Audience Reviews for The Bridge at Remagen

I have loved warfilms since I was a kid and this doesnt dissapoint...

The Bridge at Remagen Quotes