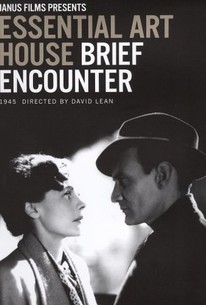 Critics Consensus: Brief Encounter adds a small but valuable gem to the Lean filmography, depicting a doomed couple's illicit connection with affecting sensitivity and a pair of powerful performance.

Critics Consensus: Brief Encounter adds a small but valuable gem to the Lean filmography, depicting a doomed couple's illicit connection with affecting sensitivity and a pair of powerful performance.

Critic Consensus: Brief Encounter adds a small but valuable gem to the Lean filmography, depicting a doomed couple's illicit connection with affecting sensitivity and a pair of powerful performance.

On a cafe at a railway station, housewife Laura Jesson meets Dr. Alec Harvey. Although they are already married, they gradually fall in love with each other. They continue to meet every Thursday on the small cafe, although they know that their love is impossible

Jack May
as Boatman
View All

Lean's sad, buttoned-up account of unconsummated love is about all of us and our cautious natures.

Romance and goodness are evoked with equal power and from these conflicting impulses, voluptuous demons spring eternal.

One of cinema's classic love stories.

One of the most vivid, impassioned and painfully believable love stories ever committed to celluloid.

Sheer perfection-the gold standard of tragic romances whose influence can still be seen to this day.

Cyril Raymond manages to invest the stodgy character with a lovable quality.

For a movie where it appears that very little happens, this classic 1940s British romantic drama packs an almighty emotional punch.

Rate this offering as one of the better British films.

Lean solidified his mastery of emotional intimacy even without the epic scope, and crafted what many consider to be one of his finest achievements.

If it was made today it would probably be tawdry and tasteless but here it strikes just the right note.

This is a poet's film, harsh, cruel and lovely. There have been few better British films than Brief Encounter even at a time when our studios are taking their place in the vanguard of this great contemporary art.

A delicate and tearful romance that offers a surprisingly honest look into extramarital love considering when it was made, my sole objection being intrusive scenes involving secondary characters which interfere sometimes with the focus and tone of the main plotline.

Boring. I just didn't care for the relationship or the characters. There's also no story, just multiple scenes of the romance developing (I guess you can call that the story, an uninteresting one at that. Only for romance fans). The movie's running time is less than 90 minutes, but trust me, it feels as if it's over two hours. It never goes anywhere interesting thus making it a dull film.

Two strangers meet in a train station waiting area, both happily married yet magnetically drawn to each other in spite of that. David Lean's adult question, set to Sergei Rachmaninoff's yearning 2nd Concerto, simply wonders what we may want once we have everything we want and has endured for its grown up (if dramatic) consideration of the same.

This is one of the most gorgeous films of the forties, adapted from the play by the prolific Noel Coward; Brief Encounter is one of the more taboo films from that era. Other films that came after it were far more fastidious in their rendering of the sexual aspect to these clumsy affairs, but this film is far more psychological, directing much of the film's emphasis on the emotional toll of lying to yourself and your loved ones. This simple tale is a familiar one to us all: two married people meet and fall in love unexpectedly. The film covers the trials and rollercoaster of denial, adoration, and admonishment that comes with having an affair and not knowing it. The two leads (Broadway legends Celia Johnson and Trevor Howard) act as if they were still on the stage, their facial expressions, the way they hold one another, the way they carry themselves in these desperate times, really spoke volumes about the way the characters interacted with each other. None of the other minimal characters attributed to this film truly matter, not even their significant others. The reason this film works while retaining the same concept we've seen time and again is that there is a level of devotion and attraction not seen in other films. These two don't want to be unfaithful to their spouses. They were perfectly happy with their small lives, eating in the same tea rooms, watching films in crowded theaters, and going home on their respective evening trains, but just a flicker of hope rose between them over time. Laura (Johnson) right away feels the inert danger of seeing a man who isn't her husband, and even confesses to seeing this man the first time they meet, but her husband doesn't see anything the matter and so she is assured that she isnâ(TM)t doing anything wrong. Then over time they start wanting to not be seen together by friends, finding ways to be intimate in the ways they spend their time together, and eventually they can't contain their feelings for one another and express their passion by way of kissing. Director David Lean explores the fact that love is never wrong, while expressly stating that the characters believe the exact opposite. Eventually their small, compact world is torn away from them, and the loss that Laura goes through with his departure, the fact that they never truly get to say goodbye and will never again say hello, is such a bitter and hollow pill to swallow. With the interesting ways this is shot, the texture and feel of this beautiful film and the use of black and white to bring out Johnson and Howard's performances was perpetually brilliant. Just a classic love story unparalleled in this day and age.