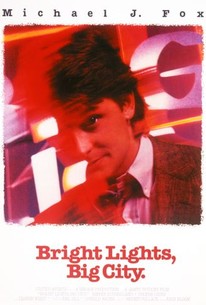 Michael J. Fox once more makes a courageous effort to shed his nice-guy image in Bright Lights, Big City. Fox plays an impressionable Kansan who comes to the Big Apple to take a job at a major magazine. It isn't long before he falls into the twin traps of drug and alcohol abuse. His only hope for redemption is in the hands of Vicky (Tracy Pollan), the cousin of his scuzzy drinking buddy Tad (Kiefer Sutherland). Jay McInerney's bestselling novel does not translate easily to the big screen, but Fox strives hard to please, as do all of his costars. The white stuff snorted by Fox wasn't really cocaine, but powdered milk. Watch for Frasier's David Hyde Pierce in a small role and Jason Robards in a significant unbilled cameo.

Jim Babchak
as Bartender at Disco

James Babchak
as Bartender at Disco

Weekly Ketchup: Sony announces Men in Black III
Casting News on "I Am Legend" — Plus, Depp Is Out

Mr. Bridges may not have breathed fire into this material, but he has preserved most of its better qualities. He has treated it with intelligence, respect and no undue reverence, assembling a coherent film that resists any hint of exploitation.

The movie is like a Porsche outfitted with a lawn mower engine; there's not even enough juice to get the machine out of the driveway.

Fox is very good in the central role (he has a long drunken monologue that is the best thing he has ever done in a movie).

Bright Lights, Big City is no worse than most movies that present a selfindulgent, self-pitying WASP male view of the world.

Jamie may be less articulate and inspired than Holden Caulfield, but he seems as genuine a spokesman for his time.

Flyblown, devoid of pace and heat; it's such a mortician's slab that it's hard to even tell if the Fox performance is wasted on it, though I suspect it is.

truth be told, nothing much happens other than a series of increasingly mortifying benders

Even when the story lingers at times, the central character is played so strongly that you can still stay with the film.

This slice of New York yuppie angst is watchable, but forgettable.

A fantastic cast, and a heavy drama, this is a good movie, it's very 80s, I really enjoyed it, and I highly recommend it..

A movie that will intrigue you and will pull you in and show you what its like to be a cocaine addict.

This left much to be desired. I think Michael was miscast, but the plot and dialogue wasn't that great either. Some books should not be made into movies.