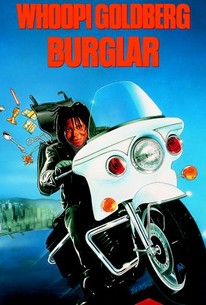 Director of the first Police Academy movie, Hugh Wilson is also responsible for the action comedy-caper Burglar. Bernice Rhodenbarr (Whoopi Goldberg) is a retired cat burglar who works at a bookstore. Bad cop Ray Kirschman (G.W. Bailey) blackmails her, so she agrees to do a job for Dr. Cynthia Sheldrake (Lesley Ann Warren) in order to get the money. While she is doing the robbery, she accidentally stumbles onto the scene of a murder. Since she is the prime suspect, Bernice is forced into many chase scenes as she plays detective to find out who the real murderer is in order to clear her name. She is aided by her only two friends: the hapless dog groomer Carl Hefler (Bob Goldthwait) and the drunken floozy Frankie (Elizabeth Ruscio). Along the way, she almost gets killed by numerous tough guys while being closely followed by two stupid cops (Anne DeSalvo and John Goodman).

Thom Bray
as Shoplifter in Bookstore

Raye Birk
as The Jogger

Scott Lincoln
as Man in Cadillac

Rick Hamilton
as Man in Hallway

Robert Ernst
as Officer with Warrant

John LeFan
as Customer at Parker's on Fifth

Margaret Lenzey
as Waitress at Parker's on Fifth

Ethan Phillips
as Bartender at Parker's on Fifth

James Terry
as Bartender at The Art Bar

Amy Michelson
as Waitress at The Art Bar

Spike Sorrentino
as Chief of Detectives

Hugh Wilson
as Customer at Mayday

Bill Jelliffe
as Officer with Searchlight

A witless, hapless exercise in the wrong way to package Goldberg.

One of Whoopi's laziest vehicles ... and she's done her share.

I love Bobcat in this movie, he's funny as usual, but the rest of the cast is just okay. I liked this movie, but it could have been better, it's pretty cheesy at times.

Funny... Bobcat is hilarious in this.

A film that taught me how painful watching until the credits roll can be.