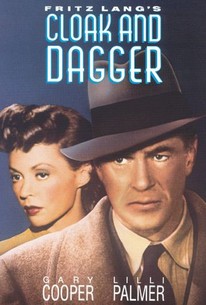 Inspired by actual events, Cloak and Dagger was first major "atomic power" melodrama of the postwar era. Gary Cooper stars as bookish physics professor Alvah Jesper, a character obviously based on A-bomb codeveloper J. Robert Oppenheimer. Pressed into service by the OSS in the last months of WW2, Jasper is sent to Europe in search of Dr. Polda (Vladimir Sokoloff), an atomic scientist held captive by the Nazis. In Switzerland, Jesper quickly runs afoul of enemy spies who murder the only person to know Polda's whereabouts. Moving on to Italy, he links up with the partisans, falling in love with gorgeous resistance fighter Gina (Lilli Palmer). Adopting a disguise, Jesper finally locates Polda and spends the last few reels in a desperate dash to freedom. Screenwriters Albert Maltz and Ring Lardner Jr. had originally intended Cloak and Dagger as a warning to a complacent America. Director Fritz Lang recalled in later years that, as conceived and filmed, the ending was to have occured after Jesper and a group of Allied soldiers stumbled upon the ruins of a secret Nazi A-bomb factory, as well as evidence that the German scientists had fled to parts unknown with their atomic secrets intact. "It's day one of the Atomic Age", Jesper was to have noted ruefully, "And God help us if we think we can keep it a secret much longer." This lengthy coda was removed from the final release print, transforming a thought-provoking drama into a mere romantic thriller. ~ Hal Erickson, Rovi

Elvira Curci
as Woman in Street

Critic Reviews for Cloak and Dagger

There are some nifty thriller tropes, including a high-tech camera pen and a sexy Nazi agent played by Marjorie Hoshelle, but the film finds its heart in the delicately played romance between Jesper and a traumatised resistance fighter, Gina.

Cloak and Dagger has its sharp, melodramatic moments high with excitement and its sequences so taut with suspense that the more susceptible types will be suffering from shattered nerves before the thing is done.

Starring Gary Cooper and Lili Plamer, Fritz Lang's WWII melodrama is one of the first Hollywood pictures to deal with the global threats of the atomic bomb.

Minor spy thriller has some good touches from the great Fritz Lang.

Much longer and less focused that You Only Live Once, it's still a vintage Lang picture and worth seeing.

Audience Reviews for Cloak and Dagger

Good not great film with Coop's character annoyingly dense and obtuse at times which puts others in grave danger. Lilli is strong suffering none of Gary's indecision. Not top flight Lang but all his films are worth seeing and this one has many quality moments.

A confusing, at times very boring, but at other times pretty good spy movie from the forties.

Alfred Hitchcock was not the only great director to make anti-Nazi porpaganda films. Fritz Lang, himself an escapee from Nazi Germany, made this film to warn of the dangers of atomic power in the hands of fascists. It's essentially a spy film as it follows scientist Gary Cooper as he infiltrates an enemy project to produce an atomic bomb. Fritz Lang's keen eye for black and white photography and gritty drama works really well in the early scenes as he cranks up the suspense as Cooper evades the Gestapo to help rescue an eminent scientist from their clutches. Unfortunately things nose dive at the appearance of Lilli Palmer, although her character is initially intriguing. Casablanca proved that used subtly, a doomed romance between star crossed lovers can compliment political intrigue brilliantly. The ham-fisted approach in evidence here couldn't be further away though, as Palmer's fiery and proud partisan soon has her heart melted and she becomes an insipid doe-eyed lump who is just waiting for a strong American to take her away from all this. The fact that this corny Mills & Boonery makes the tough guy heroics and gritty realism take a back seat for a solid twenty minutes nearly kills the film stone dead. It gets much better for the finale when it returns to the point but it just serves to highlight what a missed opportunity this film really was.