The Count of Monte Cristo1934 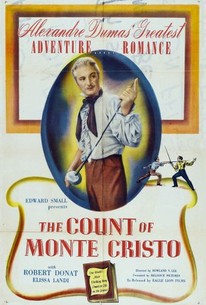 The Count of Monte Cristo Photos

Few famous novels have been filmed as often as Alexandre Dumas' The Count of Monte Cristo--and few versions are as enjoyable as this 1934 adaptation starring Robert Donat. Donat plays Edmond Dantes, wrongly accused of a plot against the post-Napoleonic French government. Condemned to a prison cell in the impenetrable Chateau D'If, Dantes vows vengeance against the four conspirators who framed him. He is particularly anxious to give his ex-friend Mondego (Sidney Blackmer) his comeuppance, since it was Mondego who married Dantes' fiancee Mercedes (Elissa Landi). Twelve years pass; with the help of ancient fellow prisoner Abbe Foria (O.P. Heggie), Dantes digs his way out of the Chateau D'If and escapes. He finds the treasure of Monte Cristo, which makes him the wealthiest man in the world. He uses his riches to put his plan of revenge into motion, methodically destroying every one of his enemies. Though he lives for vengeance, Dantes--alias the Count of Monte Cristo--has his humanity restored by the love of Mercede, who despite her marriage has always remained spiritually faithful to him. According to publicity, the 1955 TV series based on The Count of Monte Cristo was filmed on the standing sets from the 1934 film. This might well have been true, since both film and series were produced by Edward Small.

Critic Reviews for The Count of Monte Cristo

Unfortunately, many of the finer degrees of avengement aren't translated to the screen with the finesse or components necessary to create cinematic splendor.

The Dumas story very much as Dumas wrote it: which leaves nothing to complain about.

This is a picture for those whom like their full money's worth of solid entertainment.

... slow and static and creaky, stopping dead for monologues and exposition to explain what the film can't afford to show.

Audience Reviews for The Count of Monte Cristo

Nice adaptation of a good story. Donat is flawless as usual and the supporting cast does a great job too. I love the old swashbuckling films of the '30's and this one up there with Captain Blood and The Sea Hawk. Donat is really underrated.

somewhat melodramatic but still the best film adaptation of dumas' classic, a childhood fave of mine. <3 robert donat

"the count of monte cristo" is the first sound flick adapted from dumas' masterpiece. and it shows the versatile scale of the 39 steps legendary actor robert donat's potentiality for swashbuckler gendre, and also it is donat's first collaboration with hollywood. undisputedly robert donat's version is the best ever on screen. "the count of monte cristo" is alexander dumas' classic tale of chivalric avengence. donat plays dantes who has been wrongly accused of treason, and he vows to revenge due to the loss of his youth and his one true love, then he discovers the treasure of monte cristo so he purchases himself a status to cast doom to those who have mistreated him maliciously. it has the essence of swashbuckler as well as the confrontation of good and evil, but it's dubbed with a sense of solemnity instead of the errolesque frivolosity which populates in this gendre. the movie remains faithful to dumas' book and robert donat does have the knightly presence of enigmatic count and his elegance oozes from the sword duets and every suave phrase of his. the story is handled concisely to catch up the proper pace without over-sentimentalized melodramaticity despite its apparent tint of romanticism. eccentricly the mere approach for this flick to occur to people's sight would be the cameo in "v for vedentta" which is natalie portman's recent flick of dystopic graphic novel. "the count of monte cristo" becomes the parallelling comparison to the disfigured pratagonist's ruin of wretched betrayls. robert donat's accomplished performance in monte cristo earns himself an opportunity to take the lead in "captain blood" which leaves to errol flynn later. but donat turns it down becuz of his disdain for hollywood and his reluctance to shoot the production inside united states. donat is also one of hitchcock's fav leading men and hitchcock has scheduled three flicks in a row for him: "the 39 steps"," the secret agent" and "sabotage" but donat could only be in one due to his asthma illness and his dilemma of multi contracts. donat shall be one of the most talented, handsomest and mostly underused actors in britain who could have achieved superstardom. but he's tragically forgotten, so is his "count of monte cristo".

Loved it...and the eternal remakes. Great stories have a habit of making any movie.

The Count of Monte Cristo Quotes