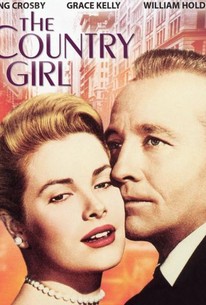 This adaptation of Clifford Odets' play stars Bing Crosby as Frank Elgin, a once-famous Broadway star who's hit the skids. Hotshot young director Bernie Dodd, a longtime admirer of Elgin, tries to get the old-timer back on his feet with a starring role in a new play.

Jack Roberts
as Man
View All

Critic Reviews for The Country Girl

Based on Odets' play, Seaton's version is an odd, overrated melodrama about co-dependency in alcoholic marriages, with decent turns by Bing Crosby and Grace Kelly as the central couple.

The backstage drama, when judged by today's standards, seems stagy, creaky and outdated.

If you enjoy Crosby as a crooner instead of a showman, this is your movie.

Two of Hollywood's greatest stars give what might be their best performances.

Audience Reviews for The Country Girl

This is kind of a wannabe version of All About Eve, if you think about it.

If you ever wanted to see Crosby in a dramatic role instead of a comedy, this is the movie to see. He gives a brilliant performance, as does the rest of the cast. The story is realistic and surprising to the end. I highly recommend this movie.

Okay film with good performances but Grace Kelly winning the Oscar for this performance against Judy Garland in A Star is Born shows the award up as the popularity contest that it is.

A great dramatic turn for all the main stars. Even when trying to look plain, Grace Kelly looks beautiful.