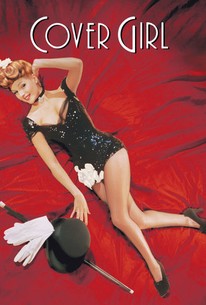 Thanks to its Jerome Kern/Ira Gershwin/Yip Harburg score and the luminescence of stars Rita Hayworth and Gene Kelly, Cover Girl has taken on a legendary status in recent years. In truth, the film has a banal and predictable premise: a chorus girl (Hayworth) is given a chance for stardom by a wealthy magazine editor (Otto Kruger), who years earlier had been in love with the girl's mother. Offered an opportunity to be a highly-paid cover girl, our heroine would faithfully remain with her tacky nightclub act if only the club manager (Kelly), whom she pines for, would ask her. He loves her too, but doesn't want to stand in her way, so he fakes an argument to send her packing. You don't need a crystal ball to known that the girl and her guy will be reunited for the finale. Phil Silvers, everybody's best friend, and Eve Arden, Kruger's acid-tongued assistant, provide comic relief. The story sags badly at times, but the fans went home happy thanks to the powerhouse musical numbers, including Long Ago and Far Away and Kelly's famous "alter-ego" dance. The film skyrocketed both Hayworth and Kelly to superstardom, and didn't do Silvers any harm, either. Cover Girl is an extraordinarily lavish Technicolor production from the usually parsimonious Columbia Pictures.

Jess Barker
as Coudair (as a young man)

Rose May Robson
as Cover Girl

Jack Norton
as Harry the Drunk

Eddie Dunn
as Mac the Cop

Patti Sheldon
as Girl
View All

A creaking plot is made bearable by gorgeous colour, the even more gorgeous Hayworth, some oddly unsentimental and unsettling flashbacks with her playing her character's turn-of-the-century grandmother.

Dance sequences spotlighting the terping abilities of Hayworth and Kelly are expertly staged.

The whole thing, especially the comic stuff from Silvers and Arden, is executed with considerable brio. And Rudolph Maté's Technicolor photography is faultless.

It has Gene Kelly and Rita Hayworth to sing and dance. And virtually every nook and corner is draped with beautiful girls.

A lush 1944 musical vehicle built for Rita Hayworth at the height of her popularity.

This is what we're here for, larger than life emotions played out with unparalleled skill and imagination.

Charming musical built on a skimpy plot but boasting a score by Jerome Kern and Ira Gershwin that includes some of their best work.

Its familiar tale of an ambitious chorus girl's sudden rise to fame is pleasant enough but not fresh enough to hold my attention.

I love this movie! Especially Gene Kelly's graceful leap into fantasy with the mirrors number. Rita Hayworth proves a surprisingly apt match for the magnificent Kelly (my husband).

I really love Rita Hayworth. He is great! So is gene kelly (as always.)

I think there's still a place for some of this in today's cinema. The musical numbers were too long, but that dancing on the street was a lot of fun. Think of what they could do with that Gene Kelly dancing with himself scene today. Now I know what all the fuss was about in Shawshank. Rita Hayworth is a fox.