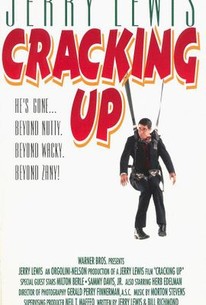 Jerry Lewis reprises his previous movie persona, this time as Warren Nefron, a man unable to successfully kill himself, while Herb Edelman is Dr. Jonas Pletchick, the psychiatrist out to cure him of his failure, in this undistinguished slapstick comedy. Many of Lewis' past routines crop up again through the device of flashbacks, as he sits in the doctor's office and remembers vignettes from his past. As usual, the French love his humor and flocked to see this film when it was first released. ~ Eleanor Mannikka, Rovi

Foster Brooks
as The Pilot

Critic Reviews for Cracking Up

Lives up to its title in ways that seem painfully intentional.

It should be considered as one of the most unfunny comedies ever made.

A twilight smorgasbord, serenely avant-garde, and the culmination of the development of Lewis' cinematic language

Audience Reviews for Cracking Up

After watching the 1st couple skits I had high hopes for this movie but it went from HILARIOUS to unfunny.Watching Jerry Lewis trying to commit suicide at the start was over the top & then going to his shrinks office & sliding & falling all over the place was hilarious but after that it just went downhill from there