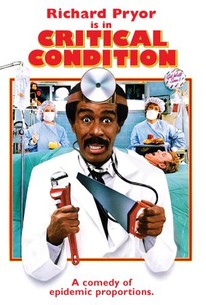 The late, great Richard Pryor stars in this farcical comedy about a small-time businessman who feigns insanity to get out of prison, and poses as a doctor during a hospital blackout. Eddie (Pryor) was on the path to success when he made the mistake of dealing with a loan shark. Now, the judge is about to toss him in prison and throw away the key. When Eddie plays the crazy card, the guards transfer him to the psychiatric ward at a Staten Island hospital. Later, a hurricane plunges the hospital into darkness, and Eddie poses as a doctor to make his escape. But his ruse works to well, and before Eddie can leave he is swept into the E.R. There, a series of comic miscommunications leave Eddie in charge if the entire hospital. Now as the patients flood in, Eddie must maintain the act until he can make a clean getaway. Bob Saget, Garrett Morris, Joe Mantegna, and Rachel Ticotin co-star.

Raymond Rosario
as Boy in Waiting Room
View All

This film is proof that sometimes the best stand-up comedians don't really do a great job at making a smooth transition to quality films. For my money, my three favorite stand-up comedians are Bill Hicks, George Carlin and Richard Pryor. The first two aren't in order, but Pryor is. The point is that Richard Pryor, realistically speaking, was probably one of the funniest people to have ever lived and yet you would never know that if you were judging by this movie. And I'm not even saying that this film was bad, surprisingly enough actually. I was surprised to find that I enjoyed some parts of the film. There are parts when Pryor is first mistaken for the ER doctor that are actually pretty manic and I thought that was enjoyable. Pryor having to go from patient to patient and dealing with the ensuing chaos is really where the film is at its best. Of course, it's best isn't ever good enough, but there are some entertaining bits in this movie. Every scene with Garrett Morris, as the helicopter junkie, was entertaining. The hernia scene might have been a little juvenile, but it had its moments. Realistically speaking, Garrett is really the best part about this movie. It's a shame that Garrett never really got much of a break in films, with the exception of some supporting roles here and there, because he is a legit funny dude. And I know he's a cast member on 2 Broke Girls, but I don't watch shit shows. Anyway, the film really doesn't have much of a story and what there is is predictable as all hell. Pryor is, at first, obviously lost since he is not an actual doctor, but as the film progresses his 'unorthodox' methods to the medical profession actually end up helping everyone out. It's a basic story that you've seen and will continue to see for as long as any medium of entertainment exists. It's done no better or worse here, it's just serviceable. Perhaps serviceable isn't even the right term, because it's not like this film offers something where you see that Pryor actually learns something, like maybe the medical profession is more difficult than he made it seem at first. But this movie doesn't even offer that, Pryor learns absolutely nothing about his actions and the fact that he put people's careers and livelihoods at risk due to his ineptitude, if something came to pass to where he messed up majorly, which this film doesn't do, of course. So I felt that they missed a chance to actually do something that resembles actual character development. But they were clearly not interested in that. Which is fine, they were going for something different. The film, much like one would expect, is like a series of skits with a plot thread barely holding it together. And that plot thread is that there's a killer on the loose in the hospital trying to escape from the storm. So, naturally, Pryor saves the day in the climax. It plays out exactly like you would expect. But I liked the film's tone, it's got a light tone and a quick pace, so even though it took me like 4 hours to get through this movie, with various distractions, it never felt like a long movie. Oh and Joe Mantegna has a pretty funny freak-out once he finds out that Pryor's character is running the hospital. That's about it really, I'm kinda surprised that this didn't end up being offensively bad. Again, Richard Pryor's track record, at least in comedies without Gene Wilder, isn't the best. So I was expecting this to be really bad. Color me surprised when I ended up getting a somewhat decent movie. Nothing that I would ever go out of my way to see, but if you've watched every movie in existence except this one, then at least this won't make you pull your hair out or want to punch babies in their fat, stupid faces. That was a joke. Clearly I'm no Richard Pryor.

OMG I forgot all about this one. Pryor went through a phase of doing some absolutely brilliant movies and this one doesnt dissapoint.