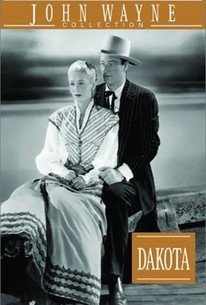 John Wayne and Vera Hruba Ralston star as John and Sandy Devlin, young marrieds struggling to survive in Dakota territory. A footloose gambler, Devlin gets involved with a bitter railroad dispute, finding himself in the middle between a group of homesteaders and a gang of land-grabbing crooks. The film is chock full of fast action sequences (a wheatfield fire is a standout!), which nearly compensate for the performance of Vera Hruba Ralston, who is duller than usual here. Adding zest to the proceedings is the presence of frequent Wayne cohorts Ward Bond and Walter Brennan-not to mention Mike Mazurki, bizarrely cast as a fancy-dan saloon hall proprietor. Eagle-eyed viewers will spot future Baretta star Robert (Bobby) Blake as a dewy-eyed kid.

Walter Brennan
as Capt. Bounce of the Riverbird

A weak adventure featuring John Wayne (before he became a star), mostly known today for its unsuccesful effort of making Czech Vera Raltson a Hollywood star.

Languid at times and poorly paced.

It feels like a long lost Howard Hawks movie, almost every one of his trademarks is present. The one man army, Walter Brennan, catchy dialogue and just about everything else. I would say the only problem is that the movie's just too short. These are great characters that I would've loved to see mature over a larger story. John Wayne is his trademark self, unstoppable and the most noble man in a sea of outlaws and criminals. Walter Brennan is hilarious as always, probably one of the greatest comedians to ever live. Ward Bond does a good job as an extremely manipulative villain, it's a shame he never played too many.