The Day the Earth Stood Still1951 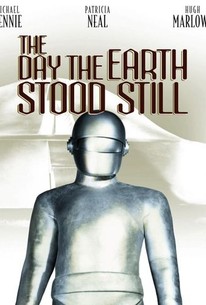 Critics Consensus: Socially minded yet entertaining, The Day the Earth Stood Still imparts its moral of peace and understanding without didacticism.

Critics Consensus: Socially minded yet entertaining, The Day the Earth Stood Still imparts its moral of peace and understanding without didacticism.

Critic Consensus: Socially minded yet entertaining, The Day the Earth Stood Still imparts its moral of peace and understanding without didacticism.

All of Washington, D.C., is thrown into a panic when an extraterrestrial spacecraft lands near the White House. Out steps Klaatu (Michael Rennie, in a role intended for Claude Rains), a handsome and soft-spoken interplanetary traveler, whose "bodyguard" is Gort (Lock Martin), a huge robot who spews forth laser-like death rays when danger threatens. After being wounded by an overzealous soldier, Klaatu announces that he has a message of the gravest importance for all humankind, which he will deliver only when all the leaders of all nations will agree to meet with him. World politics being what they are in 1951, Klaatu's demands are turned down and he is ordered to remain in the hospital, where his wounds are being tended. Klaatu escapes, taking refuge in a boarding house, where he poses as one "Mr. Carpenter" (one of the film's many parallels between Klaatu and Christ). There the benign alien gains the confidence of a lovely widow (Patricia Neal) and her son, Bobby (Billy Gray), neither of whom tumble to his other-worldly origins, and seeks out the gentleman whom Bobby regards as "the smartest man in the world" -- an Einstein-like scientist, Dr. Barnhardt (Sam Jaffe). The next day, at precisely 12 o'clock, Klaatu arranges for the world to "stand still" -- he shuts down all electrical power in the world, with the exception of essentials like hospitals and planes in flight. Directed by Robert Wise, who edited Citizen Kane (1941) and The Magnificent Ambersons (1942) for director Orson Welles before going on to direct such major 1960s musicals as West Side Story (1961) and The Sound of Music (1965), The Day the Earth Stood Still was based on the story Farewell to the Master by Harry Bates. ~ Hal Erickson, Rovi

Drew Pearson
as Himself

H.V. Kaltenborn
as Commentator
View All

Critic Reviews for The Day the Earth Stood Still

More thoughtful and restrained than most sci-fi of the period, The Day the Earth Stood Still has aged better than almost all of its peers.

Iconic from the get-go.

The Day the Earth Stood Still may at first look like goofy, outdated science fiction, but its timeless warnings about violence, nuclear confrontation and the difficulties of policing the planet have made it an enduring cultural classic.

Like most of Robert Wise's work, this slickly constructed 1951 science fiction film settles squarely in the middle of its genre, better than some and worse than others.

Cast, although secondary to the story, works well.

This is a superbly crafted, landmark film which invested a much-derided -- and frequently ludicrous -- genre with a welcome degree of dignity and respectability.

THE DAY THE EARTH STOOD STILL is a sentimental favorite among Fifties science fiction films. It is certainly good but not nearly as good as its reputation would make it.

One of the best sci-fi films I've ever seen, built with ambitious special effects, a lurid soundtrack, and a powerful metaphor about pacifism and the moral contradictions of a society on the brink of self-destruction. [Full review in Spanish]

Writer Edmund H. North's adaptation proves that an intelligent, well-written script can easily make up for a lack in visual luster.

The Day the Earth Stood Still (1951) is one of the most influential, seminal fantasy science fiction films in motion picture history. The counter-revolutionary, big-budget film provided salient social commentary about the madness of Cold War politics...

It's as much Christ parable as science fiction film... yet its message is delivered less like a sermon than a threat.

Yes kids, media was idiotic and hysterical long before the likes of Glenn Beck were around.

Audience Reviews for The Day the Earth Stood Still

An intelligent and challenging science-fiction classic that makes elegant allusions to Jesus Christ's life (even in the character's alias, Carpenter) and speaks directly to the audience in the end defending the importance of non-aggression in a time dominated by fear.

An interplanetary traveler visits Earth to dissuade humans' violence and paranoia. As science fiction classics go, this one is up there among the best. Yes, it's moralistic, and its main character gets a little preachy at the end, but most good science fiction uses an extraordinary event to comment upon the ordinary, and The Day the Earth Stood Still's comment resonates today. The performances are a little choppy and over-rehearsed. Michael Rennie sounds like he's reading his lines out of a phone book, and Patricia Neal went to damsel school and graduated with high honors. But all of it is tempered by that classic movie pace and a strong story. Overall, science fiction when done well looks like this.

A surprisingly mature 50's sci-fi movie. Manages to get across its social messages without coming across as preachy. The cast does a great job with the material given to them, Michael Rennie is fabulous as Klaatu. The visuals are very good for the time and the film also contains some really gripping suspense scenes. A very touching sci-fi tale that still holds up to this day.

Gripping and suspenseful right from the start, this is a genre classic, a tale of a strange happening that keeps you in the dark most of the way. Why is this spaceman here? And what if the world doesn't hear him out? Intriguing and efficient in its storytelling. I'm not sure if it was a "B" movie in its day (probably), but much of what it was doing 60 years ago has since gone mainstream, meaning that this film's still easy to watch (or, cough, remake) nowadays. Essential viewing whether you're a sci-fi fan or not.