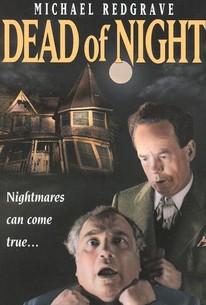 A phone rings. Architect Mervyn Johns is wakened from a nightmare and summoned to the country estate of Roland Culver. Here he meets several strangers, all of whom seem vaguely familiar to him. The conversation turns to nightmares, with each guest relating a recent disturbing dream or real-life event. Anthony Baird weaves a tale about being invited into a hearse with the words "Room for one more, sir." Teen-ager Sally Ann Howes speaks of the time that she met a strange, melancholy child dressed in 19th-century garb during a birthday party. Googie Withers recalls with a shudder how an antique mirror purchased by her husband Ralph Michael nearly prompted her strangulation. There is a comic interlude involving golfers Basil Radford and Naunton Wayne, one of whom is flummoxed by the ubiquitous ghost of the other. The best is saved till last: the story of unbalanced ventriloquist Michael Redgrave and his malevolent dummy. At the end of this round-robin, Johns suddenly and without warning kills psychiatrist Frederick Valk -- just as he predicted that he would. Johns runs from the house, confronting scenes from the various aforementioned nightmares, and then finds himself safe in his own bed. It's all been a horrible dream. And then, the phone rings, and Johns is summoned to the country estate of Roland Culver.....Perhaps the single most influential "portmanteau" film ever made, Dead of Night was for years available only in a crudely re-edited version, eliminated the Sally Ann Howes and the "golfing" vignettes. Even when fully restored, the full effect of the film was lost whenever some thick-witted projectionist would shut off the film before the "deja vu" closing credits.

John McGuire
as Hugo
View All

News & Interviews for Dead of Night

View All Dead of Night News

Critic Reviews for Dead of Night

It offers the same sort of spine-cooling thrill you get from listening to a group of accomplished liars swapping ghost stories.

The audience is worked up to thrilling point with one story when it breaks to pick up another... It ls like eating a dinner in which, while you are enjoying toe fish, the plate is snatched away and poultry or dessert is substituted.

For the lover of good entertainment, the whole picture is worth seeing, once its somewhat disconnected style is understood and taken for granted.

There is much sound acting and directing in Dead of Night, but the handicaps inherent in the form this film chooses prove too much for its ingenuity.

Producer Michael Balcon turned each individual episode over to a different director and, told via flashback, they're equally good.

A dead scary horror movie that skimps on the blood but not the goose bumps,

From such an excellent whole it seems a pity to single out any parts for special praise, but I thought that the direction, acting and writing of the tale of the ventriloquist's dummy was superb.

This is a masterful bit of work on the part of all the several directors and screen writers involved in it. It is the sort of thing that can chill you and give you a wondrous bit of fun at the same time.

Each of the episodes is interesting and thrilling, but the most fascinating is the one about the ventriloquist; its weirdness will send chills up and down one's spine.

Episodic in structure, it excites a mounting interest in its imaginative story value, which is doubly enhanced by its expert direction and exceptionally fine cast.

This is probably Ealing Studios' best effort to date.

Audience Reviews for Dead of Night

It is a beautiful thing to see how this British anthology of horror stories is so eclectic and relies mostly on an intelligent dialogue, having completely influenced the genre ever since and offering us five tales ranging from spooky to funny to chilling to creepy as hell.

A super-psycho-natural flick. For a 1945 flick, the scripting seems quite advanced. Not the best, but definitely worth a watch (and maybe even more entertaining if you can resist looking for plot-holes).

Many of the reviews I've read over the years of "Dead of Night" seem to sideline the "Christmas Party" episode as being less successful and effective than the other stories involved. At first, I tended to agree with them; however, after a while it dawned on me that there was something rather unusual about the sequence that I couldn't quite place my finger on. Normally, in a ghost story, any part of the story containing the appearance of the ghost looks rather unreal in comparison with the everyday part to underline the supernatural aspect of the spectre's apparition. However, in this particular story, it's the (real) children's party that looks unreal, and the (supernatural) ghost that looks real. The party shows a massive house, with a roaring log fire, loads of toys, food, etc, and the children enjoying themselves enormously, without any adults present. It has the look of a fantasy of the perfect party any child would want. However, the meeting with the young boy seems more rooted in reality, and this is the irony of the story - that Constance Kent, the sister he mentions, actually did exist and did admit to killing her younger brother. In real life, the boy was actually a baby when he was murdered, but his age has obviously been changed so that Sally could talk to him. This gives an extra poignancy to the story, in that he likes Sally and presumably would have wanted her for his real sister, but instead had Constance, who killed him - the worst crime she could have committed against a helpless child. I think it would be wrong to overlook this sequence as unworthy of comment, and reassess its value in "Dead of Night". It may not be as frightening as the famed ventriloquist story, but it does carry an emotional power which is perhaps its strongest point.

The best horror movie of 1945, maybe even of the whole decade! See it for yourself.