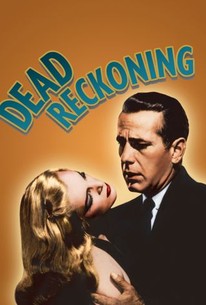 In Dead Reckoning, Rip Murdock (Humphrey Bogart) recites the film's plotline to a priest in the confessional. Murdock and Johnny Drake (William Prince) are Congressional Medal of Honor recipients, en route to Washington by train. Drake hops off and disappears, leading Murdock on a hectic manhunt. Upon meeting Drake's former girlfriend Coral Chandler (Lizabeth Scott), Murdock is thrown into a maelstrom of intrigue involving a crooked gambler (Morris Carnovsky) and a complex blackmailing scheme. The upshot of this is that Murdock finds himself the prime suspect in a murder.

Charles Jordan
as Mike the Bartender

Sayre Dearing
as Croupier
View All

A bleak crime melodrama that is too complexly plotted for it own good.

Brilliant, pessimistic, enchanting and fascinating tone, noir at its best. as always, Bogart rocks in his antiheroism.

A good cast, but an average story, makes for an okay movie.

Another Humphrey Bogart Film that is over the top. Returning home from World War II, Captain "Rip" Murdock (Bogart) and Sergeant Johnny Drake are due for the Congressional Medal of Honor and Distinguished Service Cross. Johnny Doesn't want not part of it and bolts from the train, only later to be found dead. Johnny's lover is played by Lizabeth Scott who everyone falls in love with. She?s not a Becall but she?s as pretty as any female from the after WWII Time Frame. 4 1/2 stars

I wasn't a huge fan of this. The lighting and style were adequate, the Bogart and Scott were solid, the only stand out was the dialog. For Noir complete-ests only.