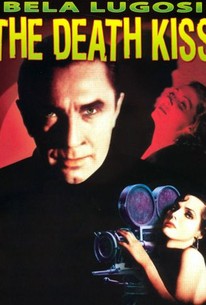 While Tonart Studios is filming a gangster movie, one of the actors is killed in a shooting accident. After several other incidents occur, police begin to think of sabotage. Their list of suspects includes the studio chief (Alexander Carr), his manager (Bela Lugosi), the director of the film (Edward Van Sloan) and an actress (Adrienne Ames).

Vince Barnett
as Off. Gulliver

Critic Reviews for The Death Kiss

Three of the stars of the 1931 horror classic Dracula popped up the following year in this nifty little B flick that not only functions as an engaging murder-mystery but doubles as a peek behind the scenes at a small-scale movie studio.

Utterly forgettable and very much a product of the times, the film is evidence of a time when cheapie B productions were hardly interested in furthering the craft of sound in cinema.

Dazzles with a surprise ending and entertains throughout with a witty script.

Audience Reviews for The Death Kiss