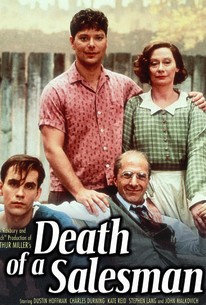 Death of a Salesman Photos

In 1984, actor Dustin Hoffman starred in a critically-acclaimed Broadway revival of playwright Arthur Miller's classic Pulitzer Prize-winning drama Death of a Salesman. A year later, Hoffman and most of his fellow cast members starred in this made-for-TV production, the first English-language film by German director Volker Schlondorff. Hoffman stars as Willy Loman, an aging salesman who has lost his job because of encroaching senility. Now living on handouts provided by his friend Charley (Charles Durning), Willy's lifelong delusions of success and greatness awaiting just around the corner for he and his family have been shattered, and he's considering suicide. As he reflects on his life and the failed promise of his sons Biff (John Malkovich) and Happy (Stephen Lang), Willy finally confronts some unpleasant truths about both sons, particularly Biff, a one-time athlete who has become a kleptomaniac. One of the best of the many filmed versions of Miller's seminal work, Death of a Salesman (1985) won several awards, including a Golden Globe and an Emmy for Hoffman.

Karen Needle
as Letta
View All

News & Interviews for Death of a Salesman

View All Death of a Salesman News

Critic Reviews for Death of a Salesman

Miller has taken a small, intimate tale and expanded it into a treatise on larger themes, primarily the abuse of the American Dream.

Death of a Salesman, directed by Volker Schlondorff, draws out the multiple meanings of this Pulitzer Prize-winning play by Arthur Miller about change, family and fatherhood, work and love.

Schlöndorff's artificial settings and some amazing performances help keep this from looking like a typical "filmed play."

They MAKE you watch it in English class for a good reason!

Audience Reviews for Death of a Salesman

Great performances aside, it's still a play. Therefore, it involves four people talking in a room. Whether you enjoy it or not depends on your definition of cinema.

A terrible adaptation. Even Dustin Hoffman's performance is painfully over-the-top and forced in this shoddily directed, cheap-looking TV movie. Stay away from this one.

Death of a Salesman Quotes