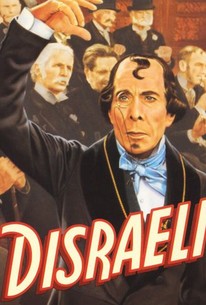 In the early days of sound film, one of Warner Bros.' big box-office draws was the aging stage actor George Arliss and, in Disraeli, Arliss scored his biggest box-office hit. He is at his best as the foxy British prime minister (in a role he created on-stage and re-created earlier in a 1921 silent film version of the same play). The film concerns the machinations of Disraeli in his efforts to secure the Suez Canal for England. After his liberal opponent Gladstone defeats Disraeli's attempt to raise a line of credit to buy the Suez Canal, Disraeli retires to his country estate to plot a new strategy. When he intercepts a coded telegram from an Egyptian potentate indicating Egyptian financial problems and a willingness to make a deal on the canal, Disraeli jumps on the chance to secure funding from the Bank of England but is denied the credit. Searching for another funding source, he obtains the services of international banker Hugh Meyers (Ivan Simpson). However, when Disraeli's emissary arrives in Cairo with a check to purchase Suez, it is discovered that Meyer has gone bankrupt. Now Disraeli must enlist all his charm and wiles to persuade the Bank of England to honor the bad check.

Gwendolen Logan
as Duchess of Glastonbury

Gwendolyn Logan
as Duchess of Glastonbury

Henry Carvill
as Duke of Glastonbury

George Atkinson
as Bit
View All

In what is perhaps his greatest part, Mr. Arliss is, of course, above criticism. He is the whole picture. He wins admiration at every moment; each gesture, each expression, each word is marvellously smooth; above all his poise is so sure, and confident.

Recreating a role that he had played on stage and in a silent film, Arliss brings class and elegance to this early talkie about the British politician in one of Warner's first biopics.

George Arliss vehicle is pretty stagey, but worth seeing for his title performance.

good in its day; too stagy and hammy for today's audiences and tastes

It's a delightful film that brings back nostalgia for the good old days of 1874.

Weighed down by a terribly outdated acting style and leaden direction, but George Arliss's Oscar-winning performance makes it watchable.

Considering it was made the first year sound was prevalent the film isn't too stodgy but it is slow moving. Arliss is an actor of the grand manner which takes a little getting use to but he gives a good performance overall. Joan Bennett is sweetly appealing in her early blonde phase. She didn't really make a great impression for several years beyond this when she switched to being a brunette and a noir staple.

Slightly entertaining dated film about former British Prime Minister Disraeli as he deals with bounced cheques and international intrigue..all about the Suez and simple matters like that.

Very stagy, theatrical. Bored me. This is an early talky, so the movie industry was still struggling with adding sound and dialog to the picture. They let go of some of their good techniques from the silent era and tripped all over themselves rediscovering how to make movies.