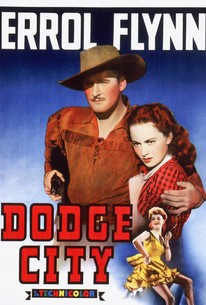 Dodge City and Stagecoach were released the same year and though featuring two very different plots, are both credited with breathing new life and legitimacy into the flagging western genre. Starring dashing Errol Flynn and beauteous Olivia de Havilland, Dodge City begins with a nailbiting race between a stagecoach and locomotive--representing the transition from the Old West to the new one. The story itself begins as an itinerant cattleman rides into the title town and ends up its appointed sheriff and assigned to rid the town of a troublesome villain and his outlaw gang. Along the way, he finds himself falling in love with a lovely saloon girl. The film's highlight is a barroom brawl that is so exciting and fast-paced that it set the standard for western movie bar fights in countless films to come.

Clem Bevans
as Charlie, the Barber

George Guhl
as Jaxon, the Marshal

Jack Mower
as Man at Funeral

Horace B. Carpenter
as Train Passenger

''Dodge City,'' Michael Curtiz's rousing 1939 oater about the civilizing of the ''wide-open Babylon of the American West,'' has everything...

A well-crafted and perfectly capable western.

A big splashy Hollywood spectacle, with gorgeous sets and a riot of colors in the costumes and wide-open skies.

Dodge City spirited Errol Flynn away from his swashbuckling milieu and into a Wild West setting, and the match proved so natural that the Australian actor found himself cast in several more sagebrush sagas over the ensuing years.

A sprawling epic Western influenced by the Wyatt Earp legend.

Anything that could be brought to a Western was done so in "Dodge City".

Warner Brothers thought to try Errol Flynn (the latest Douglas Fairbanks at the time), in a western, but he himself was not too sure that his adoring public would accept him, a popular Swashbuckler, in a saddle. He needn't've worried as he, Director Michael Curtiz, and the usual gang of Warner Brothers stock players (including Alan Hale, natch!) serve up a rousing oater good enough for even John Wayne. The barroom brawl has only been topped by Mel Brooks, so go figure. and, of course, waiting in the wings, the ever so demure Olivia de Havilland.

Errol goes out West for a gunslinging Tombstone style clean up of new city, Dodge City. I'm not totally keen on westerns to be honest, apart from afew Eastwood pictures they just aren't my thing. Like all westerns of this era they do look kinda quaint and too charming, not very realistic compared to more later westerns (of course), the acting is oh so sweet haha its all very nice and darling with a reasonable amount happening to keep you interested. Olivia de Havilland (film 5 of 9 together with Flynn) and Alan Hale both join Errol again in fine form directed AGAIN by Curtiz...the Warner super star director of all star cast pictures. There is actually plenty of action and fighting with a reasonable amount of smooching here, the technicolour is evident and lovely yet not as good as other films and locations are rural and real, not much set work by the looks of it. Not the best Flynn film for me but I can see why its a classic.

Errol Flynn proves he's just as adept with a six gun as a sword in this classic western that reunited him with Olivia De Havilland and Michael Curtiz. Rousing gun fights, bar room brawls and knockabout comedy shot in glorious technicolor.

rollicking western with the Warners stock company in good form and Errol Flynn quite good, why he has an australian accent in the middle of Kansas is something that requires a suspension of belief though.