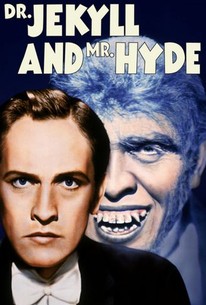 Critics Consensus: A classic. The definitive version of the Robert Louis Stevenson novella from 1931, with innovative special effects, atmospheric cinematography and deranged overacting.

Critics Consensus: A classic. The definitive version of the Robert Louis Stevenson novella from 1931, with innovative special effects, atmospheric cinematography and deranged overacting.

Critic Consensus: A classic. The definitive version of the Robert Louis Stevenson novella from 1931, with innovative special effects, atmospheric cinematography and deranged overacting.

The good Doctor Jekyll invents a drug that unleashes Mr. Hyde, the incarnation of his uncontrollable evil side, with devastating consequences. The first sound film version of this oft-told Robert Louis Stevenson story, this visually inventive horror classic features an Oscar-winning performance by Frederic March in the split personality of the title role. Incidentally, this film uses the more proper pronunciation GEE-kyl, rather than the currently more-often heard JECK-yl.

One seeks in vain for an adequate development in this film of the powerful psychology which must remain the essential motive of such a fantasy as Stevenson created. A mere succession of incidents does not furnish this study.

The onlooker, instead of being filled with righteous horror and indignation, begins to find so much super invention and thoroughness irresistibly comic.

Fredric March, ably assisted by Miriam Hopkins and Rose Hobart, is magnificent as Hyde, and he gives Jekyll a stilted Victorian elegance which, being a little false, makes Hyde's existence seem more credible.

Camera trick of changing a central figure from the handsome Fredric March into the bestial, ape-like monster Hyde, carries a terrific punch, but in each successive use of the device -- and it is repeated four times -- it weakens in hair-raising effort.

It's a lurid potboiler which is notable for some superb camera work (a long POV tracking shot at the beginning of the film for example), some innovative early special effects and some of the most deranged overacting you are ever likely to see.

Made during that brief period when Hollywood sound films explored quite racy material... Dr. Jekyll and Mr. Hyde quite explicitly links Jekyll's woes to sexual frustration.

While thrills principally abound In the story it also contains comedy Interest and a most enchanting romance.

It is morbid, and even unhealthy in theme, but it is suspensive and holds the spectator's interest to the very end.

[Dr. Jekyll and Mr. Hyde] is altogether a brilliant effort and should be added to your list of better screen entertainments.

Dr. Jekyll and Mr. Hyde is a pleasantly unpleasant picture.

While not unduly terrifying, which may be set down as a point in its favor, this talker version of the famous dual personality character is sufficiently dramatic and gripping to satisfy any demand for shocker entertainment.

The overacting is too much for me but the transformation scenes are pretty cool. A classic, but not for me.

Robert Louis Stevenson's cautionary tale of obsession and dark passions is given fine treatment by Mamoulian, the make-up artists and, of course, Fredric March as the young impatient doctor who cannot wait to taste the fruits of life. Miriam Hopkins, too, is in rare form as the not-so-sweet object of desire.

who could compete with that sizzling seductive whisper..."come back...SOON...." with a sexy leg rolling by the bedside to scratch your libido into thousands of visceral hard-ons...ha! now i'm being bawdy. maybe just slightly obscene?