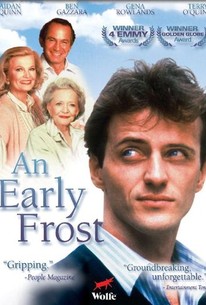 Originally telecast November 11, 1985, An Early Frost was the first TV movie to deal with the subject of AIDS. Aidan Quinn plays a personable young gay lawyer who is stricken with the HIV virus. As his health deteriorates, Quinn finds that his physical agony is secondary to his mental anguish. Ben Gazzara and Gena Rowlands play Quinn's parents, who must not only come to grips with their son's impending death, but with their own long-standing fears and prejudices concerning homosexuality. No easy answers are offered in this realistic drama, which also stars Sylvia Sidney as Quinn's grandmother and John Glover as a fellow AIDS victim. Ron Cowen and Daniel Lipman won Emmys for their pioneering teleplay.

Critic Reviews for An Early Frost

Though a capusle of its times, this groundbreaking TV film, the first work about AIDS in film or television (but not theater) holds up well due to high-caliber acting by Aidan Quinn as the son with AIDS and Ben Gazzarra and Gena Rowlands as his parents

Audience Reviews for An Early Frost

great important film, some of the information is obviously dated but the strong performances by all involved make it a powerful experience