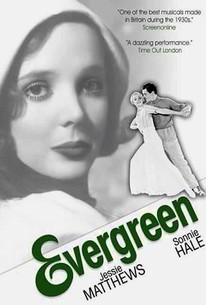 The old Ben W. Levy war-horse play Evergreen proved to be an excellent film vehicle from British music-comedy star Jessie Matthews. Our heroine plays a popular music hall thrush of the early 1900s, whose impending marriage into nobility is destroyed by the arrival of her long-thought-dead lover. When the latter demands "hush money," Matthews disappears from public view, but not before leaving her infant daughter in the care of her maid. Flash-forward to 1924: the daughter, also played by Matthews, is seeking work as a chorus dancer. An old associate of Matthews' mother, amazed at the resemblance between the two women, decides to pass her off as her long-lost parent, making a big publicity fuss over her "ageless" beauty. The younger Matthews confesses the ruse when she falls in love with a man who claims to be the older Matthews' son. Are you following all this, or do you need a road map? Anyway, if you catch a complete print of Evergreen, you'll be able to enjoy five songs performed by Jessie Matthews, one of them by no less than Rodgers and Hart. ~ Hal Erickson, Rovi

Ivor McLaren
as Marquis of Staines

The technique of this production, its presentation, everywhere rises above the material it is handling, but the last dance-ensemble is an anti-climax which is apt to upset one's final impressions of the rest of the picture.

There are no featured audience reviews yet. Click the link below to see what others say about Evergreen!