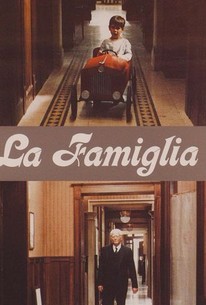 A family history is recalled by the venerable patriarch Carlo (Vittorio Gassman) as he prepares to celebrate his 80th birthday. Young Carlo (Andrea Massimo) marries Beatrice (Stefania Sandrelli) in 1926 but later has an illicit affair with her bohemian artist sister Adriana (Fanny Ardant). Fascism, World War II, and the raising of children and grandchildren mark the passing of a lifetime. Old Carlo lives with his grandson where his recollections are interrupted by the gentle nagging of his beloved Beatrice. This feature received an Oscar nomination in 1987 for "Best Foreign Film."

Vittorio Gassman
as Carlo, as a man / Carlo's grandfather

Andrea Occhipinti
as Carlo as a young man

Alberto Gimignani
as Giulio, as a boy

Massimo Dapporto
as Giulio, as a boy

Carlo Dapporto
as Giulio, as a man

Cecilia Dazzi
as Beatrice, as a girl

Jo Champa
as Adriana (as a girl)

Ricky Tognazzi
as Paolino, as a man

Sergio Castellitto
as Carletto, as a man

Marco Vivio
as Carletto (as a boy)

Giuseppe Cederna
as Enrico (as a man)

[The Family] has the manner of a film that was conceived as an idea: a family chronicle that unfolds entirely within a single set, thus to call attention to the blood ties that bind. The characters and events were thought up later.

Ettore Scola's The Family, an album with a velvet cover, is meant to touch the extended family of man. But like somebody else's home movies, after a while it simply wears thin.

La Famiglia is a vital work from a living icon, the Italian Ettore Scola. [Full Review in Spanish]

Though the subject matter here isn't particularly new or surprising, never has any filmmaker captured more eloquently the love and fury that coexist within every family.

An excellent intergenerational family drama that traces 80 years of Italian history through the life of one man, without leaving the walls of his Roman apartment.

Charts the vocabulary of love within one household over a period of 80 years.

There are no featured reviews for La Famiglia (The Family) at this time.