Far From the Madding Crowd1967 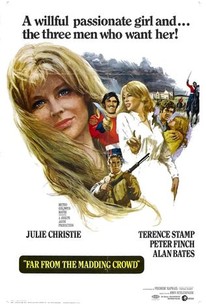 Far From the Madding Crowd Photos

This 1967 version of Thomas Hardy's novel should have done better at the box office than it did, given the star power of Julie Christie and the visual and aural fidelity to its source material. Julie Christie plays Bathsheba Everdene, a country heiress who is loved by three different men: Terence Stamp, Peter Finch and Alan Bates. Convinced that she is the intellectual superior of all three, Bathesheba loses many early opportunities for lasting happiness. Finally shedding herself of her haughty attitude, Bathsheba unconditionally accepts the love of Bates. The euphoric exuberance of Nicolas Roeg's photography is matched by the direction of John Schlesinger and the screenplay by Frederick Raphael. Only the nittiest of nitpickers would complain that some of the medium shots don't match the closeups (watch Terence Stamp's clown makeup in one scene). ~ Hal Erickson, Rovi

Jonathan Newth
as Gentleman at Cockfight

Alba
as Gentleman at Party

Hugh Walker
as Farmers at Corn Exchange
View All

Critic Reviews for Far From the Madding Crowd

With the emphasis on plot rather than character only Julie Christie finds a part she can turn round in, suggesting convincingly Bathsheba's curious combination of coquetry with integrity.

Splendidly lusty fare, its feet deep in the mud of the English countryside, its head in the lens-flared glare of a dreamy tragi-romantic sky.

Mostly this is a triumph ...

Everything in this extraordinary evocation of island life is seasonal; these folk, their affections and fortunes, shift with the winds and tides.

It's maybe not up there in the pantheon of British classics, but there's something highly relaxing and radical about the fact that Schlesinger articulates this classical story with breathy longeurs ...

Christie carries the film with her own insouciant vulnerability. A classic.

There is so little authentic feeling in Far From the Madding Crowd.

I expected a movie to make me stand up and cheer or at least sit up and take notice. Instead it's curl-up and doze-fitfully time.

I haven't walked out on a film in years; it was a depressing experience.

[VIDEO ESSAY] Visually lush, and powerfully acted by a quartet of England's finest actors, John Schlesinger's "Far From the Madding Crowd" is admirable in spite of its imprecise narrative focus and flaws in its direction.

Far from the Madding Crowd has the not uncommon effect with a classic of sending one back to the book, for reassurance that Hardy really did achieve what the film hasn't.

Helped by the shimmering photography of Nicolas Roeg and hindered by a straitjacket of a script by Frederic Raphael, this laudable, lengthy adaptation of Thomas Hardy's classic novel might have benefited from a less respectful treatment.

Audience Reviews for Far From the Madding Crowd

A very faithful adaptation that may not be a memorable classic but translates well the essence of Hardy's novel into a concise narrative that benefits from a uniformly perfect cast and takes its time to tell what it needs without rush, despite the rather hasty ending.

Absolutely gorgeous version of the Hardy classic, with some captivating scenes particularly the storm sequence. Some of the top talent of the acting world of the 60's is on hand making this an entertaining epic. A livelier pace would have made it more compelling however. All the leads acquit themselves well but top honors go to Alan Bates, an actor of great skill.

Hardy's novel is brought to life with passion and flair.

John Schlesinger's surprisingly dull three-hour epic "Far From the Madding Crowd" is not so much a movie as a TV mini-series. It is grandly majestic in its look but puny in its content and perspective. Just because something is filmed in wide-screen Cinemascope and covers a long chronological period doesn't mean it is broad in perspective. "Madding" has the look of a grand epic but the content of a soap opera. The Thomas Hardy novel upon which it is based must have some depth. But Schlesinger ends up providing the appearance of depth more than the real thing. His actors, who are almost absurdly talented, give a lot of meaningful looks, but they have little to say that is interesting. Almost everyone from England's 1960s acting royalty is represented here, including Julie Christie, Terence Stamp, Alan Bates and Peter Finch. But great actors cannot do much more than look regal when all they have is soap opera to play. This is the downfall of British television in general: almost without fail it puts aristocratic actors into petit-bourgeois soap opera. The film Schlesinger made after this, "Midnight Cowboy" (1969), is so much better than "Madding" that it's almost surreal. How could the same person direct these two films in the span of a few years? Amazing. (Incidentally, I still don't know what the hell "madding" means. Also incidentally, if you haven't seen "Midnight Cowboy," you are missing out on something extraordinary.)

Far From the Madding Crowd Quotes