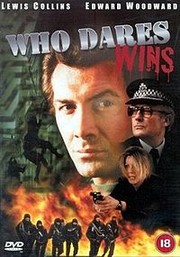 Who Dares Wins (The Final Option)

Solomon G
December 11, 2017
They rushed this film out and it shows. The seduction sequence and the rock concert are genuinely funny without wishing to be. Nice action piece at the end saves it from Razzie status.

Robert A
November 6, 2017
This film is two hours of waiting followed by 10 minutes of intense action. And when the action comes boy does it come. Lewis Collins is brilliant as the SAS captain and he should have been Bond. RIP Lewis Collins

Ally W
July 7, 2016
A brilliant action film back in the day and still worth a watch now. Lewis Collins definitely should've played Bond at some time in his career.

David S
August 31, 2015
Still an awesome film after all these years

James F
November 29, 2013
Released a year after the Iranian embassy siege in Princes Gate, this film does little to add to the anonymity the SAS prefer. Lewis Collins is Peter Skellen, an SAS captain who leaves the service under a cloud to infiltrate the People's Lobby - a left-wing radical group with an extremist agenda. Looked at 30 years after being made, it is easy to see the many flaws in the film, nevertheless it does provide a reasonable 2 hour escape. Just don't assume it is in any way indicative of how the hooligans of Hereford operate!

Stephen C
October 10, 2011
A bone headed right wing classic which has plenty of action mixed with some very odd dance sequences and a terrible rock concert.

Lewis Collins of The Professionals fame plays Skellern an SAS man assinged to investigate the goings on of a so called peace group who are against nuclear weapons.

Skellern does this really really easily and the film is very very silly with Judy Davis playing a sexy terrorist and Edward Woodward and Richard Widmark looking on as Collins gets to kill loads of terrorsits in the final embassy seige secne which is of course an Homage to the storming ot The Iranian Embassy in 1980.

Yes its all a bit stupid and the film certainly wont win any Oscars but it does what it says on the tin and sometimes thats really all you needd from a film of this time.

Richard J
July 2, 2011
I was a teenager fascinated with all things Special Forces when I first watched this movie, so of course, I was delighted by it. I saw on Netflix instant watch for nostalgia purposes and found I still enjoyed it, despite its failings.

Director Ian Sharp watched the SAS take back the Iranian Embassy in London via ITN news and wanted to make a movie out of it. The creators decided to replace the regional revolutionaries of Khuzestani, who sought return of autonomy to their region of Iran, with a more palatable bad guy, a radical Marxist element of anti-nuclear demonstrators (very popular at the time) called The People's Lobby. Their plan is to siege the American Ambassador's residence, the Winfield House, during a dinner for other prominent American statesman, and the British Foreign Secretary; then force the British government to launch a nuclear weapon on Holy Loch Scotland so that the whole world can see the effects of nuclear devastation, expecting people to rise up and demand an end to nuclear armaments.

While the movie has plenty of plot holes, I would like to take issue with something I read by Roger Ebert. He points out in his review that the terrorist were stupid to think the British would attack their own submarine base with a nuclear weapon. No, really, Roger? They say just that in movie. Do terrorists always act with unflappable logic? Did the Khuzestani militants that took the Iranian Embassy really think the Tehran was going to capitulate to their demands just because they pulled their stunt in front of the Western media? If they did, they were no less stupid than the terrorists portrayed in this movie. I agree the portrayal of The People's Lobby is a bit right slanted and a parody of Marxist revolutionaries, but so what?

The British know these radicals are up to something, but they don't know what, so they put an SAS Officer on the case by faking his dismissal through staged gross misconduct. This is by far the weakest plot point in the film. No SAS officer is going to be charged with infiltrating a terrorist cell, but for the sake of keeping characters to a minimum, that's just what they do. In their last night together, Skellen's wife asks stoically, "Whatever this is, Peter, how long will it last?" He simply tells her that'll he'll be overseas for a while. The next morning he takes up a flat as a maritally separated, disgraced SAS officer, and then meets his contact to gain information. I actually think Lewis Collins would have made a good James Bond. I wonder if he was ever considered for the part.

Skellen inevitably meets Frankie Leith, the de facto head of the radicals, who's the heiress of vast wealth bequeathed her by her deceased father, and beds her. It's a jab at other children of privilege who went onto to be Marxist radicals to be sure. She likes having an ex-SAS man who claims his expulsion from the SAS was on the grounds that his political leanings were too radical, and who further claims that her methods are nothing more than flowery rhetoric and cheap showmanship. While she is excited to have him as part of her operation, confessing to her comrades unbeknownst to him, that his experience will be invaluable when they actually have to deal with the SAS during their takeover. Her lieutenants, however, are anything but trusting of this tryst and they go out of their way to expose Skellen as a plant, discovering and murdering his contact, and taking his family hostage in their home.

Frankie's true plan, and her knowledge of his deception are revealed to Skellen, who is now forced to go with the group, who have kidnapped the Air Force Band's coach on the way from RAF Lakenheath to London. Disguised as the band, and faking American accents, they storm the party once inside and take everyone hostage. She gives the British government 18 hours to carry out her demands. After some negotiation she proves unwilling to bend on any point and the SAS is called in to storm the residence. Meanwhile the Police have gone into the flat next to Peter's home and set up surveillance on the kidnappers. This is exactly how the SAS gathered information during the Iranian Embassy crisis, by using the shared all with the next building to set up a fiber optic camera. As things begin to heat up inside the house between Peter's wife and her captors, the SAS blow the wall with detonating cord and kill both terrorists. At the Ambassador's residence, Peter manages to coordinate a time for the operation via Morse code. At 1000 the SAS swoop in via helicopters mimicking the tactics viewed during the Iranian Embassy rescue. All the terrorists are killed, including Frankie, even though Peter hesitates to pull the trigger.

Just as they disappeared into legend in 1980, so the SAS quickly board their helicopters and are gone. The final scene is a direct shot a British Labour as a Parliamentary Minister is seen meeting with a shadowy figure that had provided The People's Lobby with a 100,000 pound contribution at the beginning of the film. I loved the political swipe at the end.

Gordon T
October 28, 2010
Under the title THE FINAL OPTION is how I first this movie on PRISM Cable-TV and on MGM/UA video . . . now the only way to see it is as WHO DARES WINS on overseas DVD . . . of course you can get it ANYWHERE online these days.

a European Terrorist Group "The Peoples' Lobby" led by Frankie Leith (played by Judy Davis) wishes to EXPLODE a NUCLEAR WEAPON over South Scotland to show the world EXACTLY the devastation that will occur in the event of a Nuclear War.

Here in The United States of America its like some political-extremist-turned-terrorist group wanting to explode a Nuclear Warhead in Oklahoma or Nebraska . . .

The Peoples' Lobby hold everyone hostage including Captain Richard Skellen ([Lewis Collins] of the British-SAS who infiltrated The Peoples' Lobby only to be found-out to be a double-agent and await their demands to be met.

Yet just to be sure Captain Richard Skellen doesn't "pull a fast one,"

INGRID PITT starred in THE WICKER MAN, THE VAMPIRE LOVERS, THE HOUSE THAT DRIPPED BLOOD, and as Countess Elizabeth Bathory (pronounced Bat-or-e) who bathed in virgin-blood in COUNTESS DRACULA, so its a treat to see INGRID PITT "go at it" in a life and death struggle with Richard Skellen's diminutive wife (Rosylind Lloyd).

Not to give too much away but when the SAS STORM The Building, the cinematographer puts the SAS soldiers' masks over the camera for AWESOME Point of View sequences of death and carnage.

Roy Budd's TREMENDOUS SCORE is often on my MP3 player and I'm sometimes listening to it when I upload my slides.

Critics usually hate THE FINAL OPTION and give it One Star out of Four or Five . . .

To me THE FINAL OPTION aka WHO DARES WINS is AWESOME MOVIE-ACTION and LEWIS COLLINS as Richard Skellen is super smooth and debonair . . .

with ROY BUDD'S AWESOME SCORE forefront in my mind THE FINAL OPTION (aka Who Dares Wins) RULES SUPREME!!!!!!!


"The Final Option," hmmmm. I wonder if the title sounded too much like Adolph Hitler's "Final Solution" deal and they changed it--Europe sees Nazi Germany, Hitler, and The Holocaust quite differently than us over here in The United States . . . in 1982 (almost THIRTY YEARS AGO) a lot of people still remembered the Nazi's scourging Europe.

Now, probably nobody really remembers Nazi Germany so thinking that THE FINAL OPTION sounds too much like THE FINAL SOLUTION would be pointless.

hey, ask somebody what The Final Solution was and I'll bet they haven't heard it.

The Final Solution was Hitler's ENDGAME scenario, where he knew The Allied Forces would discover the concentration camps and ordered the Nazis to kill every prisoner immediately--prisoners were locked in barns and barns were set on fire and stuff during The Final Solution.

That Nobody even remembers The Final Solution means it can happen again, so its important to remember it.

Alistair L
April 16, 2010
5 stars, just for the scene where the vicar gets walloped.

Craig M
½ April 3, 2010
The synopsis isn't correct and was obviously written by a Yank as the SAS are certainly not Commandos !! (a little pedantic I know, but they are Troopers, sourced from British Army Regiments and Fijian Army.
Commandoes are Royal Marines - (navy), whose special forces are the SBS)

Ghost729
March 5, 2010
Very Suspenseful and it had a satisfying ending. Widmark had some great lines in it. Great 80's movie.