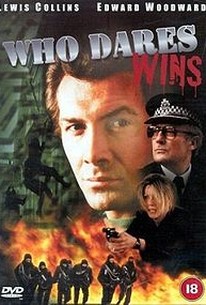 Released in the U.S. under the title The Final Option, this action thriller was produced and set in Great Britain. The British Special Air Services, an anti-terrorist group, is pitted against an organization of international terrorists who plan to take over the U.S. Embassy in London and hold everyone hostage. Captain Skellen (Louis Collins), a member of the Special Air Services, assumes a false identity in order to infiltrate the terrorists, who are rogue members of the anti-nuclear-weapons movement -- and uncover their plans. Judy Davis appears as Frankie, a key member of the anti-nuclear group. ~ Michael Betzold, Rovi

Richard Widmark
as Secretary of State

Ziggy Byfield
as Baker
View All

Critic Reviews for Who Dares Wins (The Final Option)

There are so many errors of judgment, strategy, behavior and simple plausibility in this movie that we just give up and wait for it to end. You know you're in trouble when the movie's audience knows more about terrorism than the terrorists do.

Audience Reviews for Who Dares Wins (The Final Option)

There are no featured audience reviews yet. Click the link below to see what others say about Who Dares Wins (The Final Option)!