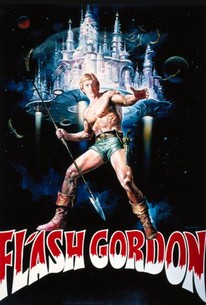 Critics Consensus: Campy charm and a knowing sense of humor help to overcome a silly plot involving a spacefaring ex-football player, his adoring bevy of groupies, and a supervillain named Ming the Merciless.

Critics Consensus: Campy charm and a knowing sense of humor help to overcome a silly plot involving a spacefaring ex-football player, his adoring bevy of groupies, and a supervillain named Ming the Merciless.

Critic Consensus: Campy charm and a knowing sense of humor help to overcome a silly plot involving a spacefaring ex-football player, his adoring bevy of groupies, and a supervillain named Ming the Merciless.

Heroic earthling Flash Gordon saves the world from the nefarious Ming the Merciless in this lavish, intentionally campy adaptation of the famous sci-fi comic strip. The story is as basic as space operas get: Ming (Max von Sydow) has developed a plan to destroy the Earth, and Flash (Sam J. Jones) and his attractive companion, Dale Arden (Melody Anderson), are called upon to stop him. Along the way, Flash must battle Ming's goons and the temptations of a luscious space princess. Previously the basis for a more straight-faced 1930s adventure serial, Flash's story is mined here for exaggerated, cartoon humor by screenwriter Lorenzo Semple Jr., a central figure in the similarly campy '60s Batman television series. The simplistic plot mainly serves as an excuse for spectacular sets and cartoonish action sequences, all set to an appropriately over-the-top rock score by Queen. Certainly not a film to turn to for serious excitement, fine performances, or character development, Flash Gordon has nevertheless developed an appreciative cult of fans who admire the film's humorous approach and the detailed, colorful production design.

Robbie Coltrane
as Man at Airport

Sally Nicholson
as Queen of Azuria

Doretta Dunkler
as Queen of Frigia

Colin Taylor
as King of Frigia

George Harris
as Prince of Ardentia

Basically, whether laughing with this film, or at it, you'll have a blast.

Perhaps, like many a superhero film, this one flags just a little in the final battle sequences, but Von Sydow is always there to keep things bizarre, playing it absolutely straight.

a mid-air skirmish of corny old-fashioned retrofuturism and knowing postmodernism, even as its veneer of homespun innocence keeps being subverted by the corrupting powers of kink.

The expensive new version of Flash Gordon is a lot more gaudy, and just as dumb, as the original series starring Buster Crabbe.

The narrative is a little plodding, but adult punters will soon slip back into areverie for the lost visions of Saturday morning cinema.

Once upon a time, comic book movies weren't always such serious affairs.

The combination of so many forms of bad filmmaking results in a campy bit of surreally over-the-top fun.

Director Mike Hodges' Flash Gordon is a wonderfully executed piece of science fiction cinema. It's a film which has become a much deserved cult classic since its original release way back in 1980.

Elements of it may have aged more like a discarded pint of warm beer than a fine wine, but that doesn't prevent it from being a sheer delight from start to finish - in all of its ultra-camp glory.

Gloriously hokey, revelling in cheesy squalor, the good girl gone wrong ... but she's dating You (and that makes all the difference until she tells you she's pregnant!). So badddd.

Goofy tribute to old time sci-fi serials is silly and cheap looking but since it's on purpose it comes across as fun. Dalton, von Sydow and Topol all seem to be having a ball taking a break from the more serious work they are known for.