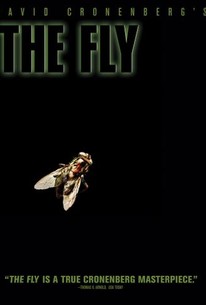 Considered fairly gruesome in its day, the original 1958 The Fly looks like Mister Rogers' Neighborhood compared to this 1986 remake. Jeff Goldblum and Geena Davis star as Seth Brundle, a self-involved research scientist, and Veronica Quaife, a science-magazine reporter. Inviting Veronica to his lab, Seth prepares to demonstrate his "telepod," which can theoretically transfer matter through space. As they grow closer over the next few weeks, she inadvertently goads Seth into experimenting with human beings rather than inanimate objects. Seth himself enters the telepod, preparing to transmit himself through the ether -- but he doesn't know that he is sharing the telepod with a tiny housefly. ~ Hal Erickson, Rovi

Michael Copeman
as Man in Bar

Shawn Hewitt
as Clerk
View All

News & Interviews for The Fly

View All The Fly News

Critic Reviews for The Fly

What makes The Fly such a stunning piece of obsessive film making is the way Cronenberg deftly allows us to identify with his monstrous creation.

Wildly imaginative, gut-wrenchingly scarifying and profoundly primal (not to mention funny), David Cronenberg's The Fly is a movie that whacks you in the solar plexus and leaves you gasping.

What's good about the film are the strong performances and the ingenious, mostly amusing script. What's ugly, of course, is the grossness. And what's bad is the movie's inability to reconcile its good and ugly aspects.

As slimy and as grotesque as some of its special effects become, The Fly is a far superior horror film to the top-grossing film in America of late, Aliens.

The Fly seizes on our ingrained, instinctive horror of sexuality, the sense of shame that our fundamentally puritanical society can't help but teach us, and by confirming our worst fears, helps us, for a moment, to move beyond them.

A gross-your-eyes-out horror movie that is also the year's most poignant romance.

This is David Cronenburg at his best. It's messy, it's discomforting, and it's ultimately devastating.

A masterpiece of a tragic horror romance.

Top tier Cronenberg. This is the start of the auteur's shift into accessible, mainstream Hollywood fare, but it's still maintains his interest in damaged men and weird scientist. What surprises most is how affecting the love story is

The body horror genre can be neatly divided into two eras: before The Fly, and after The Fly

Even stranger avenues would come, but The Fly would move Cronenberg to the A-list and even 35 years later, it still retains the power to shock.

It's still as frightfully vomitous, darkly humorous, and tragically beautiful as when it first premiered.

Mike Massie
Gone With The Twins
View All Critic Reviews (69)

Audience Reviews for The Fly

Fans of body horror and David Cronenberg will have so much to love in this gruesome, tense and yet tremendously heartbreaking film that not only impresses with its magnificent Oscar-winning makeup but also understands that this should be about the characters above everything else.

Goldblum and the over-the-top special effects really craft this movie into the classic that it is today, but Cronenberg's ability to find pathos in the most unlikely of places is among the film's more compelling aspects.

"The Fly" is one of the more realistically creepy films you will ever see. With great pacing leading up to the incredible transformation, David Cronenberg's fantastic picture is all about suspense, and he is a master at keeping you engaged. In the vein of "Videodrome," "The Fly" follows a similar formula, as we follow the main character's transformation into a monster of multiple sorts. The screenplay in this film is terrific and the practical effects are some of the most realistic things you will ever seen on screen. Leave it to Cronenberg to make you squirm. I loved every bit of this film, but I can't get my mind around what the creature looks like at first. I didn't feel as terrified as I think I should have been, but the acting is great which really helped. It is definitely one of my favourite horror films out there, and that is a lot coming from someone like me. It takes a lot for a horror ilm to impress or scare me. "The Fly" is a great film.