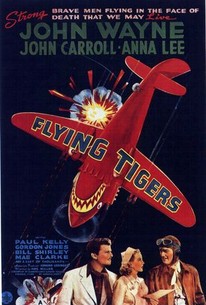 The Flying Tigers were a group of American volunteer aviators, flying against the Japanese on behalf of General Claire Chennault and Chinese leader Chiang Kai-Shek in the months just prior to World War II. John Wayne is the most responsible of the bunch, and John Carroll the least. It's bad enough that Carroll tries to beat Wayne's time with pretty Red Cross nurse Anna Lee; but when Carroll's negligence results in the death of veteran-flyer Paul Kelly, the man becomes a pariah to the rest of the pilots. Unable to serve in World War II due to health reasons, John Wayne spent the duration licking the Japanese and the Germans in front of a Republic Studios process screen.

Willie Fung
as Jim, the Waiter
View All

One of the most artistic and exciting works from Republic Pictures. [Full Review in Spanish]

As a war film, it's weak, but thematically, it is significant for introducing the two-generational conflicts that defined most of John Wayne's features, war, adventures, and Westerns.

While the plot is a clunky and the message heavyhanded, the acting is generally good.

The film's best scenes are reserved for the 1930s style airplane dog-fights.

There are no featured audience reviews yet. Click the link below to see what others say about Flying Tigers!