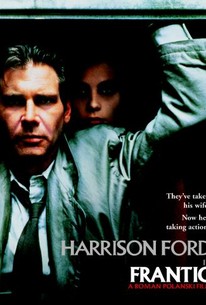 Critics Consensus: A tense, on-point thriller in the vein of Polanski's earlier work.

Critics Consensus: A tense, on-point thriller in the vein of Polanski's earlier work.

Critic Consensus: A tense, on-point thriller in the vein of Polanski's earlier work.

San Francisco doctor Harrison Ford and his wife Betty Buckley journey to Paris, where Ford is to lecture at a major medical conference. The day of their arrival, Betty happens to pick up the wrong suitcase at the airport; the next day, she completely vanishes from sight. Receiving surprisingly little help from the authorities, who assume that the missing Betty is off on a romantic rendezvous, Ford launches his own investigation, only to be sucked into a maelstrom of espionage and international terrorism. Frantic proved positively that director Roman Polanski had not lost his touch during his three-year absence from films.

Yorgo Voyagis
as The Kidnapper

Patrick Floersheim
as Man in Leather

Marcel Bluwal
as Man in Tweed

One of the best traditional thrillers to come down the pike in quite some time.

A thriller without much surprise, suspense or excitement.

[Polanski] has succeeded in picking up the clever, unnerving thread of his earlier career.

Even with its excesses, Frantic is a reminder of how absorbing a good thriller can be.

There are so many good things in Frantic that one feels irritated the movie as a whole isn't better than it is. It's certainly miles better than Polanski's most recent effort, the disastrous Pirates, but not as good as it should be.

It's a film about ordinary people put in unordinary circumstances pressed to extraordinary levels, and the film itself becomes extraordinary by the effort.

...a solid, consistently entertaining piece of work that boasts a typically stellar performance from Harrison Ford.

Curiously and effectively weds the unlikely adventure of a thriller to the plodding realism of daily life... [Blu-ray]

[An] energetic and often light-hearted thriller.

I was expecting an average thriller, but ended up with a bit less here. (Never contented, am I?) Not bad to kill time, though. The actors were fine, but their characters were hardly so. So, unless you're a die-hard Polanski/Ford fan and/or are running out of options, this isn't something to anxiously look forward to.

A doctor's wife disappears in Paris, and using only the clues in a misplaced suitcase and the help of a mysterious woman, he must find her before she is killed or he is arrested. This is a classic noir film directed by one of the genre's masters, Roman Polanski. The young Harrison Ford shows his acting chops in the film's dramatic scenes, and the final sequence is shot remarkably well with angles and camera movement that are reminiscent of classic noirs. I saw a couple homages to Touch of Evil during this climax. I also thought the relationship between Walker and Michelle, played by Emmanuelle Seigner, was well-developed. It's obvious that she captures both Walker's attraction and repulsion. He is simultaneously drawn to her as he reviles her lifestyle and the threat she poses to his marriage. However, the film moves quite slowly throughout. It's not as bad as The American, but it certainly lacks sequences of action, surprise, or intrigue until act three. Even then, the film's action sequences are relatively predictable. I also found it cliche that the kidnappers are identified as Arabs, and their ethnicity seems to be the only motive for their actions. Even in 1988 Arabs are the go-to terrorists. Finally, Walker first clue is a pack of matches in the suitcase, and I found it ham-handedly coincidental that this minor clue leads him on the right track. I recently re-watched A Very Long Engagement, and though these two films are remarkably different in many substantive ways, I liked how the mystery in Jeunet's film had so many dead-ends, which gave the film a far more realistic feel than thrillers like Frantic. Overall, Polanski's film is good, but I recommend it with a few reservations.

I actually like this more every time I see it. While Frantic is sort've thrown in with Harrison Ford's other "wife issues", it's without a doubt the most unique and artistic. It's got the risque factor that most hollywood type thrillers don't have, but it doesn't try too hard to be controversial. It's the type of role that Harrison Ford excels at, a normal person that is driven slowly to a degree of intensity that cannot be contained. This is extremely fascinating to look at and shares the same style as say Repulsion or The Tenant. The creepy score from Ennio Morricone is my new favorite part, it's subtle yet extremely effective.