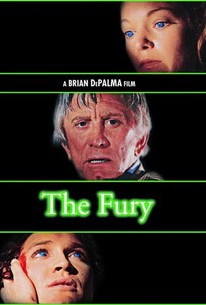 Critics Consensus: Brian De Palma reins in his stylistic flamboyance to eerie effect in The Fury, a telekinetic slow burn that rewards patient viewers with its startling set pieces.

Critic Consensus: Brian De Palma reins in his stylistic flamboyance to eerie effect in The Fury, a telekinetic slow burn that rewards patient viewers with its startling set pieces.

Brian De Palma returns to the mind-blowing potential of telekinesis in the follow-up to his 1976 horror hit Carrie. While vacationing with his psychic son, Robin (Andrew Stevens), and close associate Childress (John Cassavetes), government agent Peter Sandza (Kirk Douglas) survives a terrorist attack, only to discover that it was staged by Childress so he could kidnap Robin for his own nefarious purposes. With the assistance of another psychic (William Finley) and Hester (Carrie Snodgress), an employee at the Paragon Institute for Psychic Research, Peter discovers a telekinetic Chicago high-school girl named Gillian (Amy Irving), who may be able to help him find Robin. Even though they have never met, Gillian can see Robin's memories and experiences telepathically, and she knows that he is in trouble. But Childress knows all about Gillian, too, and he is not about to let Peter's paternal quest get in the way of his plans for harnessing their psychic power. ~ Lucia Bozzola, Rovi

Frank Yablans
as Goon on Radio

Laura Innes
as Jody
View All

Critic Reviews for The Fury

The movie that draws the deepest line in the sand between De Palma apologists and De Palma maniacs.

Brian De Palma's The Fury is a stylish entertainment, fast-paced, and acted with great energy.

It's not for the faint-hearted, the impressionable or for children It is for those who enjoy the kind of suspenseful horror film that never quite lets you on the edge of your seat and makes you believe the world it creates.

It is convoluted, confused and confusing. It has a serviceable enough idea for a genre melodrama of this sort but it has not been properly worked out.

The Fury is the best De Palma film I know, the most perfect, the less incoherent. [Full Review in Spanish]

Carrie it ain't, but Carrie had .a good suspense-mounting plot; The Fury just assaults you scene after scene without getting Peckinpah gory.

Gripping, goofy, gonzo cinema, among the best of its kind.

A hangout movie when all's said and done.

Above average supernatural doings with Kirk Douglas and some paranormal youngsters.

a pointless but exciting mishmash of action scenes and psychic effects, supported by a cast of reliable and attractive performers.

Audience Reviews for The Fury

I didn't get to see the whole movie, but it seemed okay from what I saw. The story is good and pretty interesting, I really want to see the rest of this movie.

So bad it was entertaining. Plot was nearly impossible to follow, topped off with some really bad acting and script. If it was a recent film, would have turned it off in disgust, but the 70's setting gave it a kitschy quality it perhaps didn't really deserve. By the over the top ending nearly fell off my chair laughing.

This very watchable film from Brian DePalma is worth seeing just to see John Cassavetes explode. The meta symbolism is breathtaking.