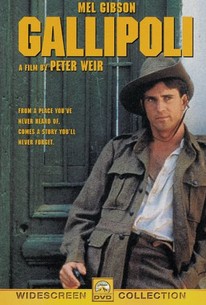 Critics Consensus: Peter Weir's devastating anti-war film features a low-key but emotionally wrenching performance from Mel Gibson as a young soldier fighting in one of World War I's most deadly and horrifying battles.

Critics Consensus: Peter Weir's devastating anti-war film features a low-key but emotionally wrenching performance from Mel Gibson as a young soldier fighting in one of World War I's most deadly and horrifying battles.

Critic Consensus: Peter Weir's devastating anti-war film features a low-key but emotionally wrenching performance from Mel Gibson as a young soldier fighting in one of World War I's most deadly and horrifying battles.

The first of two consecutive films to see director Peter Weir team with Mel Gibson (the other being The Year of Living Dangerously), Gallipoli follows two idealistic young friends, Frank (Gibson) and Archy (Mark Lee), who join the Australian army during World War I and fight the doomed Battle of Gallipoli in Turkey. The first half of the film documents the lives of the young men in Australia, detailing their personalities and beliefs. The second half of the movie chronicles the ill-fated and ill-planned battle, where the Australian and New Zealand Army Corps is hopelessly outmatched by the enemy forces. Gallipoli was the recipient of eight prizes at the 1981 Australian Film Institute Awards. ~ Matthew Tobey, Rovi

Don Barker
as N.C.O. at Ball

Gallipoli is a predictable war movie filled with all the gung-ho cliches of the genre -- and I loved it.

Gallipoli was, and is, a triumph.

Weir's objective was not to show us Gallipoli through a documentary lens, but with an artist's vision. He has succeeded magnificently.

One of the most elegiac anti-war films ever made.

A haunting and moving tribute to the Australians who sacrificed their lives in WWI.

It maintains interest throughout, without ever being a particularly gripping, dramatic experience.

Peter Weir concludes his movie by leaving promises unfulfilled. But it's precisely that absurdity, that emptiness, that he had set out to communicate. [Full Review in Spanish]

Gallipoli, like most recent Australian films such as Breaker Morant and The Chant of Jimmy Blacksmith, is fastidiously well-made and furthers the boast that Australian actors, down to the smallest bit player, can do no wrong.

There was a humanity in Gallipoli that moved me because it wasn't just a clinical exercise but a story of 2 young men who wanted to run but ended up being unable to outrace the foolish decisions of their generals.

It moved me so terribly.

Gallipoli remains one of the better World War I dramas yet made, well worth revisiting.

While purported to be about the tragic military engagement that backhandedly put Australian military on the world stage, buried within is a warts-and-all homage to the land Down Under that's loves home, even while admitting that there's not much to love, that warms the hardest of hearts.

A strong, character-building exercise amongst the backdrop of WWI and the battle of Gallipoli in Turkey, and how two young men (Mark Lee, Mel Gibson), both sprinters, become good friends in their journey to help serve in the Australian army. A buddy film for most its entirety, when it makes the hard shift over to the difficult decisions and circumstances these two characters face, we care about them and if they will survive it all. Both Lee and Gibson are excellent in their respected roles, and the film's cinematography makes for quite a different setting for war to take place in. The last scene of the movie is utterly heart-wrenching, complete with a lasting image of anti-war imagery that will stick in your mind for a long time.

Gallipoli is a superbly crafted war drama from director Peter Weir. Weir assembles a fine cast of talented actors who all give stunning performances. Gallipoli shows the chaos of the war and tells a compelling and engaging story. This is quite a different war film, and in many ways it succeeds at delivering an experience that we've never seen in the genre. The film is very well done, but lacks in accuracy. I feel that they should have done research a bit more while they were writing the script, as the accuracy of this failed campaign would surely have made this one of the definitive WWI films. As it stands this is a brilliant piece of work that could have been improved upon, but is nonetheless a well structured picture that shows the price of war. Mel Gibson is great here and you can clearly see his craft as an actor developing further with Gallipoli. The film focuses more on the cost of war than on effective action, and it pulls it off very well. Although not the definitive classic of WWI, it is one of the few films that are actually worth seeing on the subject. The acting is wonderful, and the plot is engaging from beginning to end. What makes this film stand out is the fact that is fairly subtle, yet convincing in showing the costs and chaos of war. The film will surely delight history buffs and war film buffs alike. If you want a terrific drama war film, then give this one a shot. The accuracy like I said is questionable, but it may spark an interest in the subject, which I believe is always a good thing. This is a strong effort from director Peter Weir and it is a powerful picture despite its imperfections.

Fantastic Australian story of two champion runners who volunteer as soldiers in 1915 to see the worlds. The result is thrilling and amusing, thanks to the script from playwright David Williamson. Themes of mateship, sports and class warfare cleverly thread the glorious landscape shots. Really sad for losing one of soldiers through the shoot-out war at the ending.