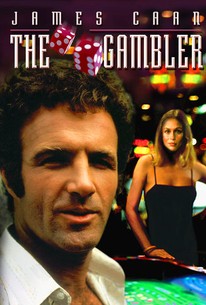 The Gambler stars James Caan in the title role. Constantly in debt, college professor Caan must rely on his former friends and associates to bail him out. Morris Carnovsky, as Caan's grandfather, is the first but hardly the last person close to Caan who washes his hands of the whole mess. As his habit becomes an incurable disease, Caan finds that the only people who will have anything to do with him are those to whom he owes money--particularly the polite but deadly loan shark portrayed by Burt Young.

Vic Tayback
as One

Joseph Attles
as Singer in the Park

Frank Scioscia
as Man in Park with Donny

Critic Reviews for The Gambler

Reisz, Caan, and screenwriter James Toback have constructed the character and the movie so convincingly that the scene not only works, but works two ways: first as suspense, and then as character revelation.

...a better-than-average character study that boasts one of Caan's very best performances.

We feel neither Axel's ghastly compulsion nor his intermittent exultation -- granted that he gets very little help from the script.

James Caan is unforgettable in this tense examination of a college professor who can't stop gambling. One of the many overlooked gems of the 1970s.

Caan doesn't need much else (aside from his 'fro) to carry the picture.

Audience Reviews for The Gambler

a thriller masquerading as a drama, but some good shots heighten what's drama; the hero needs to lose to prove to himself that he actually risked; Caan keeps us interested in him

Great drama about a born loser who is given a second chance. An incredible character drama with the always great (at least back then) Caan.