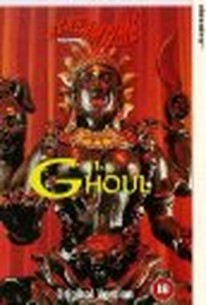 The Ghoul (The Thing in the Attic) Photos

England's Tigon studios produced fairly sophisticated period horror films in the 1970s, including this drawing-room horror-mystery directed by Hammer stalwart Freddie Francis. Peter Cushing stars as a former priest who harbors a dark and horrible secret in his attic. The locked room serves as a prison cell for his crazed, cannibalistic adult son, who acquired his savage tastes in India during his father's missionary work there. Cushing fears that his son will escape to prey upon the effete guests at his rural English estate during a cross-country auto race... though there may be more to fear from one of his guests than from his monstrous son. Far too stuffy to generate any real suspense until the violent, blood-soaked climax, this is definitely one of Tigon's lesser efforts, benefiting mainly from the presence of Cushing and John Hurt as an unbalanced young gardener. Not to be confused with the 1933 horror classic of the same name. ~ Cavett Binion, Rovi

Don Henderson
as The Ghoul

Critic Reviews for The Ghoul (The Thing in the Attic)

Audience Reviews for The Ghoul (The Thing in the Attic)

Pretty good semi horror/thriller Starring Peter Cushing who lives out on a private estate with just his maid who practices weird rituals and a caretaker whos just plain odd and a secret kept in his attic that secret being his adult son who is crazed and has a thing for human flesh he gets just that when a woman who was a passenger in a auto race ends up at the house. slow to get started with a pretty decent payoff is what makes this a 3 star movie

The Ghoul (The Thing in the Attic) Quotes