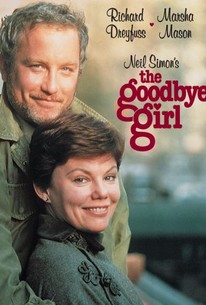 Marsha Mason is known as "The Goodbye Girl" because of all the live-in boyfriends who have said ta-ta to her in the past few years. A former Broadway chorus dancer, the divorced Mason lives in the Manhattan apartment of her latest lost love with her daughter Quinn Cummings. Enter arrogant actor Richard Dreyfuss, who has subleased the apartment from Mason's former boyfriend and moves in bag and baggage in the middle of the night. Dreyfuss and Mason spend the next few weeks getting in each other's way and fighting like cats and dogs. The wind is taken out of Dreyfuss' sails when he opens in a production of Richard III, which has been sabotaged by the director (Paul Benjamin), who insists that Dreyfuss portrays Richard as a hip-swinging homosexual. The play closes after one performance, and the once-overconfident Dreyfuss goes on a self-pitying drunken binge. Touched by his vulnerability, Mason begins falling in love with Dreyfuss despite her lousy track record with men. Richard Dreyfuss became the youngest ever "Best Actor" Oscar winner as a result of his performance.

Ruby Holbrook
as Woman in Audience

Critic Reviews for The Goodbye Girl

Dreyfuss is great but the movie has not held up well.

It's strange: We leave the movie having enjoyed its conclusion so much that we almost forgot our earlier reservations. But they were there, and they were real.

The film begins with a veneer of sympathy for the plight of the 'deserted woman' but soon embraces a plot which is romantic, male-dominated and has a happy ending.

The Goodbye Girl, alas, embraces contrivance as if it were the long lost son of The Out of Towners.

As usual. the Simon dialogue is top-notch and able to say so much beneath the prevalent humor. Anyone who has ever lost and won, struggled and succeeded, will find a bond with these characters.

The Goodbye Girl remains a bit too mechanically predictable to be a complete success.

The Goodbye Girl is a sentimental comedy that is saved by the indisputable charm of its actors and the quiet efficiency of its mise-en-scène. [Full Review in Spanish]

Richard Dreyfuss gives the best performance of his career thus far; it's being touted for an Oscar and rightfully so. Marsha Mason is equally fine in a less flashy role, and the two strike wonderful sparks together.

Stagey, literal, and sentimental, this romantic film is mediocre in every respect, writing by Neil Simon, direction by Herbert Ross.

Audience Reviews for The Goodbye Girl

A woman, Paula (Marsha Mason) & a man, Elliott Garfield (Richard Dreyfuss) are forced to share an apartment after Tony DeForrest, an actor who took care of Paula & her 10 year old daughter Lucy (Quinn Cummings in her first role) left & Elliott was next to sublet the apartment. Elliott acts as Richard lll in an off-off broadway play. Paula & Elliott fight through the duration of the film until they learn to appreciate one & another fall in love. The chemistry between Dreyfuss & Mason is wonderful & Quinn Cummings shines in the role of Mason's daughter Lucy. Another part that is funny is when Dreyfuss is acting as Richard lll :) Richard Dreyfuss's best film :) Everyone needs to see this movie :) It's just ahhhhhmazing! :) :) :) :)

This is not your average love hate relationship. Dreyfuss deserved his Oscar, and everyone deserves to see this film.

Winning love story, written by Neil Simon, has great chemistry between its leads. Scenes where Dreyfuss is a flamboyant Richard III are side-splitting.

I quite enjoyed this film. Elliot (Richard Dreyfuss) and Paula (Marsha Mason) are forced to share a New York apartment. They grow from hating to appreciating each other. Dreyfuss won an Academy award for his part, but Quinn Cummings as Paula's daughter does wonderfully in her role. The gay Richard III is a lark too.