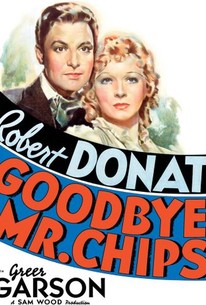 Goodbye, Mr. Chips, based on James Hilton's novel, is a melodrama about a shy British teacher named Mr. Chipping (Robert Donat) who devotes his life to teaching "his boys" after the death of his lovely, energetic American wife Katherine (Greer Garson). Told via flashbacks, the film features an aged Mr. Chipping looking back nostalgically at his long career, taking note of the people who've touched his life over the years. Donat was the recipient of a Best Actor Oscar for his portrayal of the title character, and the film features the debut performance of a young Garson.

John Longden
as Raven
View All

The original inspirational-teacher story, and a beloved valentine to classical education, tradition, and the English public boarding schools of a bygone era.

The basic heart behind "Goodbye Mr. Chips" really resonates. We need teachers who care about their students and care about the institution of learning.

Robert Donat at the peak of his skills... as moving today as it was upon its premiere.

Earnest, sweet, and charming, 1939's Goodbye, Mr. Chips is one of those classic films that falls under the category of 'they just don't make 'em like they used to.'

A standard story delivered well with not many stylistic discretions, which gives it a timeless quality.

...should continue to provide pleasure for as long as people value characterization and heart above plot contrivances and technical effects.

Start with It's a Wonderful Life and take away Christmas and all the bad stuff that happens, and you've got this movie.

Not as cloying as you might think; Donat is engaging, and Greer Garson is simply luminous.

Robert Donat is deeply affecting as the title character.

The original Chips continues to be a film classic. The film is ahead of its time in terms of realizing that war has victims on all sides even those who are on the enemy side. A weeper that you can feel good about weeping to.

Good old Mr. Chips has been teaching at the Brookfield public school for several hundred years, or so the boys say. In "Goodbye, Mr. Chips", we're taken on a journey back through those several hundred years. Actually, Mr. Chips was the latin teacher from 1870 to 1918, with several extra years tacked on for good measure. The film begins in 1933, with the elderly Chippings reminscing about his first day at Brookfield. From there, we go through the next several decades, learning of Chips' life, love, and marriage to Katherine (Greer Garson). Much like for Chips himself, the film shows years as they begin to fly by in a blur, as new boys replace old boys, and new faces look the same as their fathers and grandfathers before them, in particular, little Colley, as played by Terry Kilburn (John Colley, Peter Colley, Peter Colley II, Peter Colley III). Yes, apparently Mr. Chips taught four generations of Colleys. Goodbye, Mr. Chips wants to say something profound about the past, about the futility of war and the precious briefness of life, and sometimes succeeds in doing so quite admirably. But it's Robert Donat's through-the-years portrayal of Mr. Chips that truly makes the film stand out (in fact, Donat won the oscar that year, beating out such other noteables as Gone With The Wind's Clark Gable and Mr. Smith Goes to Washington's Jimmy Stewart). Mr. Chips might have been a rather one-dimensional character without the warmth Donat brought to his performance. While the plot itself is fairly predictable, and certain stretches of time are given short change compared to others, the film still manages to the heart after all these years.

Arthur Chipping is certianly one of the greatest heros ever to grace the screen, played by Robert Donat in his Oscar winning perfromance. Goodbye Mr. Chips is an unsung classic, a golden tearjerker, a deeply affecting movie. One of my new favourities.