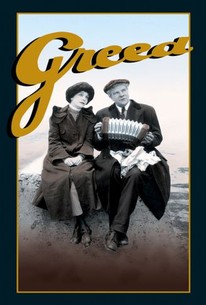 Critics Consensus: Powerful even in its incomplete form, Erich von Stroheim's Greed is a spoil of cinematic riches and a harrowing treatise on the corrupting allure of money.

Critics Consensus: Powerful even in its incomplete form, Erich von Stroheim's Greed is a spoil of cinematic riches and a harrowing treatise on the corrupting allure of money.

Critic Consensus: Powerful even in its incomplete form, Erich von Stroheim's Greed is a spoil of cinematic riches and a harrowing treatise on the corrupting allure of money.

No one living can say whether the original, ten-hour version of Erich von Stroheim's most famous movie was the epic masterpiece it was touted to be. The 140-minute version is all that remains, and while it's only a quarter of the film it was meant to be, it's still one of the greatest accomplishments of the silent film era. Based on the turn-of-the-century novel McTeague by Frank Norris, Greed takes place primarily in the San Francisco of the early 1900's. McTeague (Gibson Gowland), a brutish, earthy man comes to practice dentistry in the lower-middle-class Polk Street district. There he meets and befriends Marcus Schouler (Jean Hersholt). One day Marcus brings in his cousin and girlfriend, Trina Sieppe (Zasu Pitts) for some dental work. A romance between McTeague and Trina gradually ensues, and Marcus graciously steps aside -- until he discovers that Trina has won 5000 dollars in a lottery. He jealously watches as Trina and McTeague get married. But all is not well with the couple -- Trina holds onto her winnings for dear life, refusing to let go of a cent, even when they are forced to live in reduced circumstances because McTeague has lost his practice (Marcus has turned him in for not having a license). McTeague takes to drink as he and Trina sink into poverty and violent arguments break out between them. Finally McTeague leaves his miserly wife, who is now working as a charwoman during the day while gloating over her gold coins at night. But he later returns, intoxicated, to her squalid room and murders her, escaping with her money. He flees across the desert, pursued by a posse which includes Marcus, who still lusts after the gold. The two finally meet up on the cracked, overheated salt flats and fight to the death. But as McTeague gives Marcus the fatal blow, Marcus snaps his handcuffs around McTeague's wrist. Thus, McTeague must die in the middle of the desert, cuffed to the dead Marcus with the gold by his side. As Norris's novel was a protest against the elaborate fluff that was popular reading during the end of the 19th century, Greed was a protest against the pretentiousness and glamour that was part and parcel of Hollywood in the '20s. Nevertheless, it is a stunning visual work, and the overall sordidness of the film has a dreamy, rather nightmarish aura. Out of any American director of his era, only von Stroheim could have found such beauty in ugliness and created such fascination for the commonplace. He shot Greed with utter faithfulness to the Norris book and proposed to run the lengthy film on more than one evening, but the idea was far ahead of its time and the releasing studio, MetroGoldwyn-Mayer, insisted on radical trimming. Some of the cuts are tragic -- the introduction of McTeague's character makes him seem particularly loutish, and later it is difficult to tell whether Trina is merely a prim Victorian maiden, or if she is truly repulsed by the advances of her husband-to-be. The loss of various subplots will also be cause for eternal speculation by film historians. However, enough of Greed remains to prove that von Stroheim was an early example of an auteur par excellence.

Cesare Gravina
as Zerkow, a Junkman

Jack McDonald
as Gribbons
View All

The picture brings to light three great character performances by Gibson Gowland as McTeague, Jean Hersholt as the chum, and ZaSu Pitts as the wife.

Von Stroheim's rep, after a long dormancy, has been on the rise, and this is the best evidence of his work you'll get until someone finds those lost five hours in some Ukrainian subcellar.

Mr. von Stroheim has not missed a vulgar point, but on the other hand his direction of the effort is cunningly dramatic.

Even now its relentlessly cynical portrait of physical and moral squalor retains the ability to shock, while the Von's obsessive attention to realist detail is never prosaic.

Erich von Stroheim's Greed (1925), like the Venus de Milo, is acclaimed as a classic despite missing several parts deemed essential by its creator.

McTeague is surely a great novel, but one reason Greed is even better is that Stroheim had more lived experience to bring to the material.

Ferocity, brutality, muscle, vulgarity, crudity, naked realism and sheer genius are to be found -- great hunks of them --in Von Stroheim's production, Greed. It is a terribly powerful picture -- and an important one.

I never entered a picture house with more anticipation and departed with greater disappointment.

The McTeagues' downfall isn't the standard self-destruction through venturing down a path of crime, but rather a familial degradation of dubiety, hatred, and desperation.

'Greed' is realistic cinema, many years before the Nouvelle Vague appeared, with Stroheim delving into the human soul, as only he knew how to do, bringing out the worst, and also the best, of people. [Full Review in Spanish]

On behalf of the minority of film-goers who will, however even they may be shocked by [Erich von Stroheim's] fierce realism, perceive that he has made here a masterpiece in quite a new manner, one feels inclined to thank him.

One of the most memorable silent films in the 20s, Greed is an adaptation from the novel McTeague about how greed ruined people's live. Because the original is lost, we only have the restored version with some still images to bridge the gap of missing fragments. It was very shocking for its day I believe, it is still entertaining to watch nonetheless.

An impressive achievement leaves one wondering what was lost from Von Stroheim's original nine hour epic original. What's left is compelling with great work from ZaSu Pitts as the rapacious Trina.