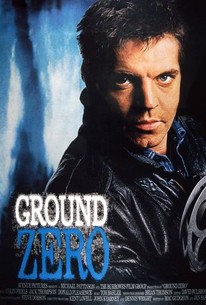 Ground Zero details a governmental cover-up as seen through the eyes of commercial photographer Colin Friels. Tipped off to the possibility that the death of his father was tied in with radioactive contamination, Friels runs into several official brick walls as he presses his investigation. At the root of everything is a hush-hush nuclear radiation test, conducted in Australia in the mid-1950s. With the help of a slightly-addled survivor (Donald Pleasence) of those tests, Friels uncovers the truth. Ground Zero was inspired by the real-life nuclear testings at Maralinga.

Mark Mitchell
as Detective
View All

Noteworthy addition to the growing number of excellent films about the beginning of the nuclear age.

There are no featured reviews for Ground Zero at this time.