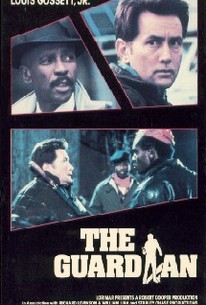 The Guardian is set in an upper-class New York apartment building, recently plagued by a series of break-ins and murders. The tenants eagerly enlist the services of former military officer John Mack (Louis Gossett Jr.) as the building's head of security. Slowly but surely, the tenants give up their freedom of movement to Mack, who runs the place like his own private fiefdom. Bristling over this infringement upon his rights, liberal-minded tenant Charles Hyatt (Martin Sheen) begins to suspect that the killings were orchestrated by Mack himself as a means of gaining power over his employers. Stirring up a respectable amount of suspense, the made-for-cable The Guardian debuted October 20, 1984, over the HBO service.

Ross Petty
as McCarthey
View All

Critic Reviews for The Guardian

There are no critic reviews yet for The Guardian. Keep checking Rotten Tomatoes for updates!

Audience Reviews for The Guardian

There are no featured audience reviews yet. Click the link below to see what others say about The Guardian!