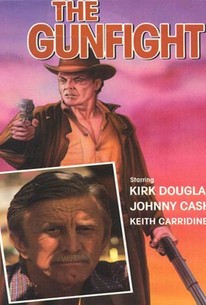 A Gunfight was the first mainstream American film to be produced by an Indian tribe -- specifically, the Jicarilla Apaches of New Mexico. Kirk Douglas and Johnny Cash star as Will and Abe, two long-in-tooth gunfighters with nary a dime between them. Although Will and Abe are fast friends, they agree to a winner-take-all showdown, selling tickets to the momentous event. The townspeople are certain that Will is going to win the shootout, but he knows that it would be a fatal mistake to underestimate Abe. Standing on the sidelines is Will's wife Nora (Jane Alexander), who seems curiously disinterested in the outcome, even though she may become a widow before the day is over. Despite the financial input of the Jicarilla tribe, A Gunfight has nothing to do with Indians; perhaps the tribe just wanted to put together a good, old-fashioned western, sans any social commentary.

Kirk Douglas
as Will

R.C. Bishop
as MacIntyre
View All

Critic Reviews for A Gunfight

It's agin bloodlust, but is all about bloodlust to sell its tale.

Great names (Douglas and Cash) do not a great western necessarily make. This is definitely not a great oater.

Audience Reviews for A Gunfight

There are no featured audience reviews yet. Click the link below to see what others say about A Gunfight!