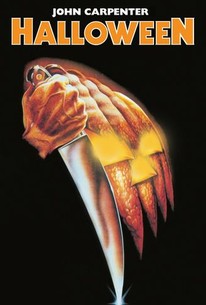 A young boy kills his sister on Halloween of 1963, and is sent to a mental hospital. 15 years later he escapes and returns to his home town in order to wreak havoc.

Tony Moran
as Michael at 21

Will Sandin
as Michael at 6

Nick Castle Jr.
as The Shape
View All

The 10 Scariest Horror Movies Ever
What Happened to Cinema’s Virginal Final Girl?
16 Awesome Horror Sidekicks: A Tribute to Our Favorite Not-So-Final Girls

Carpenter's 1978 slasher classic has inspired a million imitations as well as sequels, but few that demonstrate so clearly that a disreputable genre movie can also be a pure, rigorous work of art.

In horror, the jack-in-the-box scare... is the quickest way to get a scream, but the still shocks... are the ones that linger with you. "Halloween" has them both, but it specializes in the second.

Carpenter obviously knows the genre well and he builds a properly terrifying atmosphere through his well-paced direction. It's an effective entry for its intended market.

Well worth another look on the big screen.

This is meticulously made, with every decision working to craft the stylistic, iconic film many of us hold so dear.

The best moments of Halloween take their lead from its exemplary opening: that iconically spare musical score-cum-leitmotif, and the film's slippery command of perspective.

After 15 years under this doctor's supervision, it's unsurprising that Myers' boyhood psychopathy has ripened.

Carpenter's meticulously crafted film doesn't waste a single second, the gold standard of the slasher genre with its most effective score.

Halloween is still the best slasher in movie history.

Taylor Baker
Drink in the Movies
View All Critic Reviews (78)

Like the magnificent Texas Chain Saw Massacre that came out only four years before it, this ruthless and terrifying classic of the 1970s has been of major influence on the modern horror genre, carefully building up its tension and constant sense of menace to a nerve-wracking degree.

Still holds up after all these years. One of my all time favorite horror films that relentlessly delivers on the thrills and suspense. John Carpenter during his prime can make great horror films in his sleep. Popularized the slasher genre and has been copied countless times but nothing will ever top the original.

The "slasher film" is now a commonly known sub-genre among horror films and has developed a devoted fan base. Many would say that Alfred Hitchcock's Psycho in 1960 was one of the most influential and successful of such a film. Tobe Hooper's The Texas Chainsaw Massacre in 1974 also cited as a major player. However, there was once a "Golden Age of Slasher film" which ran from 1978 to 1984 and incorporated such iconic horror characters as A Nightmare on Elm Street's Freddy Krueger, Friday the 13th's Jason Vorhees and, of course, Halloween's Michael Myers. It's this John Carpenter film that was the kickstarter for the Golden Age and credited with being the film that defined the genre. On Halloween night, 1963, a teenager is brutally murdered by her six-year old brother, Michael Myers. After 15 years in psychiatric incarceration, Michael escapes and, with murderous intent, returns to stalk the Midwestern, Illinois suburb where he first struck. After opening on the face of a carved, candlelit pumpkin and Carpenter's now iconic synthesiser score playing overhead, we are introduced to a young, murderous Michael Myers. It's worth noting that this entire sequence is shot in 1st person shaky-cam to depict the perspective of Myers. Now somewhat of a cliche in horror movies, Carpenter's skilful inclusion of it not only makes us a voyeur but also makes us complicit in the murder. It's the only time we ever get to see things from Myers' point of view as we then spend the rest of the film trying to evade the unrelenting nature of him. Carpenter has a knack for delivering genuine chills but his real skill is in making the ordinary, "safer" moments just as scary. Most horror directors rely heavily on darkness descending before revealing the murderer/stalker/monster but Halloween's creepiest moments actually come during the daytime - Myers is seen stalking his prey while driving around schools, lurking by a hedge on a packed suburban neighbourhood or, most eerily, looking on from laundry hanging in the backyard. These are the moments where Carpenter shows his mastery of mood and composition. Without making too many ridiculous comparisons with the aforementioned Psycho, Carpenter does make tribute to the 1960's classic. Like that film, it creates suspense with minimal blood and gore and the hiring of Jamie Lee Curtis shadows that of Hitchcock's casting of her mother, Janet Leigh, while Carpenter's main theme tune has become as synonymous with horror music as Bernard Herrmann's iconic work. Both scores have been endlessly imitated and work so effectively in their repetitious simplicity. As much as these trademark approaches command respect, however, there is still something clear from the offset; the acting and the dialogue are plain woeful at times. There's no denying Carpenter's impressive ability to capture a shot or form atmosphere but, overall, it doesn't quite hold the impact it once had. This is a common problem when it comes to Carpenter's work; he was so ahead of his time and constantly trying to realise his visions on a shoestring budget that they don't often age well and a contemporary audience may well frown upon his films. Speaking of budgets, Carpenter managed to string this thing together for approx $300,000 (with the experienced Donald Pleasance receiving $20,000 of that for 18 minutes onscreen work) and shot in 20 days. With no money for a costume department, the entire cast wore their own clothes and the actual mask that Myers wore was a William Shatner Star Trek mask - spray painted white and the eyes reshaped. It was bought for $1.98 from a local hardware store. This aside, the film went on to gross $70million worldwide, making it one of the most successful independent films ever made. Halloween happens to be one of his Carpenter's most lauded and iconic films but I don't actually think it's in the same league as The Thing in terms of it's unflinching paranoia and sheer terror and I don't even think it's as good as Prince of Darkness in terms of it's concept. That said, Halloween certainly has it's place among the genre and is quite possibly the most influential of all horror movies. It has spawned countless clones, sequels and remakes and is, understandably, still revered by many. For all it's flaws, there's no denying that this was a game-changer. Even though the impact has lessened and some flaws are now glaring, there are many times where Carpenter shows that he was once a true master of his craft. Mark Walker

A maniac stalks and kills young women. The first hour of this film is spent "building suspense." With long pans, stalking shots, heavy breathing, and an effective but redundantly used score, the film thinks that we're waiting in anticipation, bundling our nerves, but I was just bored. At about the forty-five-minute mark, I couldn't wait to watch a blonde fuck and die. Even the kill scenes didn't serve up any suspense especially since i predicted who was going to die first about five minutes into the film. Overall, while it's possible that time has turned all that was original about Halloween into a cliche, there is something to be said for films that withstand time's test, and whatever that is can't be said about this film.