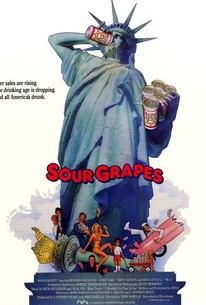 John DeBello, the man who brought you The Attack of the Killer Tomatoes back in 1978, was responsible for the 1987 fantasy farce Happy Hour. The premise: a Coors-like beer manufacturer stumbles onto a secret ingredient that compels the guzzlers of America to consume its product exclusively. The complication: the magic formula has been stolen by a rival brewery. The original beermeisters send Rich Little out to steal back the formula, while the rival company dispatches Jamie Farr to prevent Little from completing his mission. Upon meeting one another, Rich and Jamie discover that they're old college chums and former student activists. Together, Little and Farr attempt to foil the mercenary machinations of both beer companies. Is Happy Hour as funny as John DeBello imagined it to be? Let us merely observe that the film's high point is a shot of a group of six-year-olds chugging beer, and that the closing image is of a pretty blonde who chastises the audience for not being smart enough to follow the plot.

Steve Andrich
as Himself

There are no critic reviews yet for Happy Hour. Keep checking Rotten Tomatoes for updates!

There are no featured audience reviews yet. Click the link below to see what others say about Happy Hour!